Towards A Definition of Art Through Personal Memoir 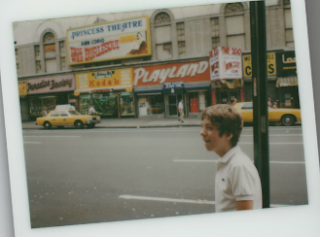 Above is a candid polaroid of me hanging out in the bad, old Times Square circa 1979. I was evidently waiting with my parents to attend a matinee on Broadway. I am not exactly sure of the title but I believe it was this middlebrow play/musical starring, (and a less likely candidate to be in such a project), Liv Ullman.

I had known Liv Ullman from a couple of Bergman masterpieces, highbrow in more than one sense of the word, in particular Persona and Face To Face. 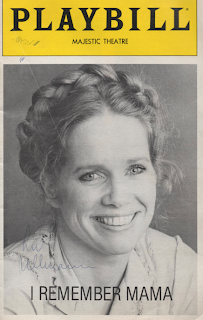 I really disliked this show. It was by Charles Strauss of Annie and Bye Bye Birdie fame. My mother cried all during the production because she said the set was an exact replica of the home she had grown up in: the Pittsburg of the 1940s.

I saw so much Broadway during those ten years. It is safe to say that I saw every Broadway or off (off) Broadway project that came through, from commerical musicals to avant-garde plays. The Joseph Papp productions in particular were full of vitality, the closest thing to the experience of a Cassavetes film that could be had on the stage. I saw the earliest examples of gay avant-garde theatre as well, from Charles Ludlum's Theatre Of The Ridiculous, to Lesbian political theatre. I did not always understand what I was seeing but I was never bored or restless.

A couple of times my father would take me down to the older Times Square so that I may study, (and he actually used the words sociology and ethnography, without bothering to define them), the rougher elements of society. He would show me the X-rated marquees and spoke vaguely of how some lonely men likes to watch such things and we discreetly watched drug dealers and hustlers go about their semi/illegal business. He pointed out who the prostitutes were, and they were rather conspicuous, so after awhile I could pick them out. He said that this world had to be contained in this section to satisfy human needs. He never explained what those needs were, only that it had to be contained in this one area because there was danger there.

I saw a lot of things down there that most children are, according to today's rules, never supposed to see, yet everything I saw was in public for the whole world to see. But at least I got a sense that this world was complicated and compromised by considerations of survival and even evil. My father always pointed out that no free will was involved in what I witnessed; rather, circumstances and "what is bred in the bone" had everything to do with it and that I had to feel sorry for the people I witnessed. He also told me that all of these people had good in them somewhere but that it wasn't allowed to shine or come forth. The goodness "was knocked out of them," was how he put it.

I would often argue in a child's way with him to try and figure out what he meant, but it made for interesting discussions. I was fortunate enough to see a lot of R rated and exploitation fare in that neighborhood, the kind of stuff a child could get in while "accompanied by a guardian".

One of the most interesting things at this time to me is that I would "see" movies and plays that attempted to deal with the themes I had witnessed in real life, in a more condensed and summarized fashion. I would often wonder about the accuracy of the representation or depiction but I felt it curious that humans would reenact such things. Already I was curious about the connection between the arts and daily "real" life.

The following is that same block in which I was pictures above. (Note the Playland sign). The particular picture showing on the marquee - The Legend Of Boggy Creek - was a witless, cheap, and incoherent adventure movie about a mysterious monster in a rural area: it was a children's/family styled horror movie, as oxymoronic as that seems. I am sure I saw this particular run at that very theatre. 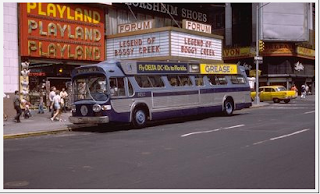 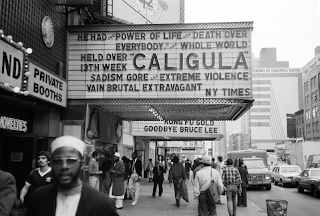 Note that the selling point of Caligula is its "sadism, gore, and extreme violence", a shameless celebration of the safely distanced consumption of represented, unreal, yet immoral behaviors for viewing pleasure. I doubt any commercial theater today would announce such motives so nakedly.
And here is the same location today: a gaudy, obscenely congested confection of  candy colored neon,  news images, all of it childish and without any human scale whatsoever. 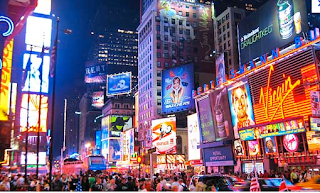 Here are some trailers giving a feel of the non-X rated material that would play at some of the movie theaters:

One of the things that occurred to me rather early on is that in one sense all of this stuff - call it culture or the arts - held one thing in common. It was made, constructed, built by human beings so that we might reflect upon our condition in this life.

I mention all of this not to discuss the history of New York City, or my personal life at all; my point is to talk about a basic fact of human existence: that we humans build, construct objects that we can call art so that we may reflect back upon ourselves removed from direct reality.

Indeed I would argue that what I have just stated is the only definition of art that seems to be sufficient enough to define the commonalities: "made-up things by ourselves so that we may reflect back upon ourselves, outside of the daily living".  We might reflect to just undergo catharsis, or for crude thrills; or we might reflect for the deepest of spiritual reasons. But in all Art we are trying in some way to reflect upon our condition. Even a distraction from that condition is still a reflection, a kind of self overhearing or eavesdropping upon our lives. This was what Persona had in common with Smokey and The Bandit and the Mark Rothko at MOMA. It was what Private Afternoons Of Pamela Mann had in common with Pippin, the two sharing more or less the same block. Indeed I think the only arts that don't really do this are the purely utilitarian ones like architecture or visual design. And even in these latter we are expressing the kind of environment in which we would like to exist.

I had a sense that these were human creations and as such artificial. Only later did I discover the etymological connection between art and artifice.

Yet I had just as an immediate sense that all of these things had very little in common. Some of it was really not worth very much, some of it was boring and disgusting and some of it enlightened my soul and spirit.

Ironically, in a flat culture like the current moment, both of these insights are forgotten. It is by not exploring the commonalities that we inevitably are unable to see crucial differences. The insight of necessary discrimination or quality, and the opposite, though equally valuable, insight of unanimity in creativity.

By treating art as if it were completely natural and at one with the world, as if it weren't the product of individual hard effort (even in collectives!) but somehow a magical appearance in culture, we do what every censor does and what politicos do. We tend to think art is not special and  not apart from everyday life. By hewing to too exclusive a criteria of what art actually is we forget that human beings made  the stage show Pippin just as surely  human beings (including those other than Bergman) made the filmed "show" Persona. Even if one of these two productions is in some deepest, objective sense really better than the other, they nevertheless share the commonality of being manufactured objects.


What I am arguing for is that Art is actually a product. It is very fashionable to describe art as a process these days. The word product has negative connotations of purely commercial intentions. But I would argue that even the least solid artwork, say, a street dance performance, or a computerized light show is nevertheless a built thing. One of the great tragedies in art criticism these days has been the loss of the art object. Everything that lacks the quality of the thing itself is discussed: politics, morality, History and so on. What gets lost is the object.

Indeed, art is not unlike a construction project. 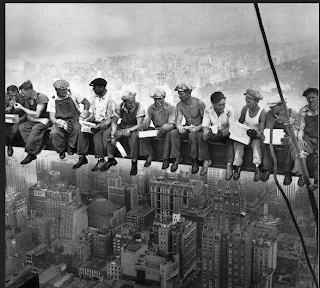 It is no accident that artists will use words like craft when discussing their work. We should not take it utterly for granted that humans manufacture and construct objects whose purpose is to help us reflect upon our lives. It is the most astonishing thing in the world. It is far easier to understand shelter, a home, and office building. It is less easy to understand a poem, a movie, and a ballet, at least in the sense that I am discussing, as human manufacturing.