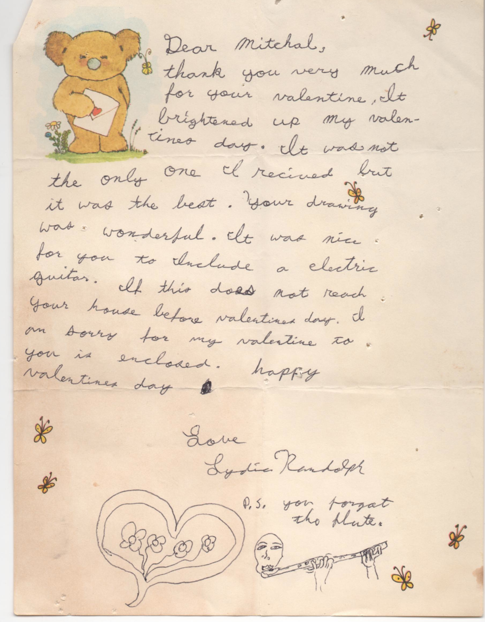 Since this is Valentine's Day I should like to attempt to make an inquiry into what Love is. Everybody knows that Love takes different forms; some of which may be the most exalted, say, the love for God, the love for a loving and supportive family, if that is your good fortune, and the love between committed partners who have genuinely decided to share their lives with one another for the "long haul", as they used to say. Of course, I should mention that there is an earthy, lusty side of love that is often less exalted, though a constant and ineradicable drive of its own and making claims upon us in a all sorts of pleasurable, painful, mischievous and benign ways. Yet all of these different things are associated with the single word love: the choice of having a single word may be a truthful expression of some underlying or overriding unity or, conversely, it may be a "reductionist" denial of separate needs.

The picture you have before you is the very first Valentine's card I received, in response to the first of such cards I ever sent. I can say now, and did say then (much to the chagrin and even consternation of this young girl, for we were both children, though precocious children) that I "loved" this girl.

Note that in the card she made it a point to admit that she received other valentines, in spite of mine being her favorite, and that, though she was learning to play the flute, also made it a point to thank me for drawing an electric guitar. Drawing the electric guitar was my own dim and stunted attempt to acknowledge her, and the world's, love for rock&roll, a love I did not share; I had though this took some imaginative comprehension and sympathy on my part. Yet note also that she mentioned that I left out her instrument which was the flute, which she in turn drew in the form of a self portrait. She clearly wanted my picture of a rock band, which was what I thought it was, to perhaps resemble Jethro Tull rather than the Rolling Stones or Kiss. In my overemphasis on the importance of rock, as it seemed to me the world was drenched in guitars, in oversight I left out the very instrument she was learning to play. This omission was innocent on my part but she certainly took notice and it was significant for her. Though we were friends for a while after that our lives took very different paths. She haunted me as we both grew older, though I played the smallest role in her consciousness.

As a freshman in high school I took the initiative to ask her out on a "real date", though we would not have used such a formulation. It was our first of such dates and was to be our last. I remember that she picked me up in a car, as she was a couple of years older than me, and I was not yet driving. When she was a child she a "Waltons" and hippie style of dress, with lots of overalls and plaid flannel shirts (and this in the Florida climate!) and lovely, naturally curly hair. This was the style of her mother. Yet now, a few years later she had remade herself into a very Glam sort of New Wave girl. This was appropriate because our date movie was the movie Valley Girl. She was very similar to Cyndi Lauper and had hoop earrings and a loud magenta dress and three inch heels. I was simultaneously confused that somebody could undergo   what I mistakenly took to be a fundamental personality change and was incredibly aroused by this change. In the parking lot, after the movie, I took hold of her and planted a kiss on her mouth, the very first intentional kiss I ever had or gave. She pushed me away and said some thing about not wanting me in "that way" in a language that was as incomprehensible to me as Farsi. This response was not what any boy or girl who had such feeling and initiative would ever expect or want. Awkward is a word that might not fully express this event, though that would be a good start.

There is is much that can go wrong in Love, so much potential for misunderstanding. Practically all of love, including the non-romantic familial and friendship kinds, is constantly plagued by a rarely considered, though innately challenging fact; that it must involve the contact, the meeting, and , alas, the the opposition of two utterly singular, thoroughly independent, free and separate wills. These two wills are always, already pursuing projects of all kinds - whether personal plans or public work. These pursuits of one of the two wills may or may not involve the other, and in fact might have been developed prior to the very meeting of both wills. There may be a difference of taste, maybe profound and radical. however much is held in common there will always be two selves attempting to interact with, deal with, even simply understand one another. These two wills must constantly negotiate, take the other into account, now with grace, now with power or aggression, now with ignorance or inattention, now with mutuality, now with something that feels like full union and integration, though even in this latter, the underlying or overriding separateness of two whole selves is always a constant, however much union is achieved.

This last fact, our sense and experience of ourselves as self regarding and freely choosing actors and agents is actually one of the most important and valuable parts of being human. Indeed, the revolutions which eventually brought about our highly imperfect, flawed democracies were precisely predicated upon this individualized humanity as I have been describing it here. We are not part of some undifferentiated mass of people, without our own private wills, nor should we be. Yet our very embodies sense of having and needing boundaries and pursuing what interests us alone often conflicts with ideas and ideals of love. Perhaps all humans are ever striving to accommodate both the freedom and dignity of separateness (Kant's "dare to use your own reason", "declaration of independence") of what is mine alone, with the opposing need and claim of merging and sharing.

This then might be a good provisional and working definition then of love: this difference or working through the problem of such difference is itself what Love is: a dialogue or relationship between two differing claims upon our humanity: to honor what is private and what is shared and hold the two in some kind of balance. In conclusion, this very process is what we could give the name Love.
Posted by dandiacal at 11:03 PM No comments: