Historian Bruce Schulman and the 1970s 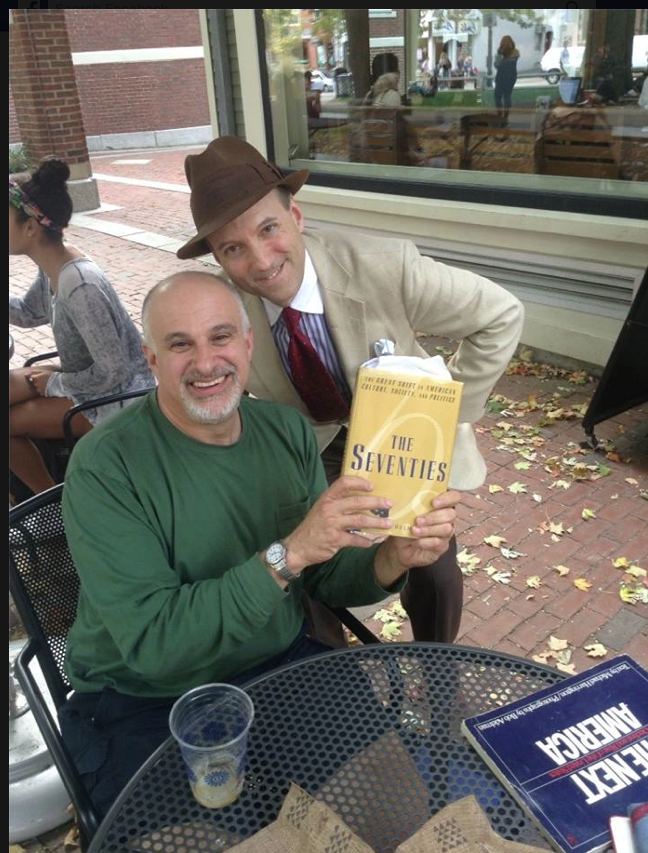 Everybody who knows me and this peculiar blog knows that among my many aesthetic passions, alongside music and the many arts, can be found the decade of the 1970s.

When it comes to the 1970s, there was one person who was the first to take it seriously, to rescue the decade's boomer centric relegation to middle child status - or worse - the person who wrote the book on the seventies, indeed called it The Seventies: Bruce Schulman. Since then 1970s historiography has certainly expanded, even exploded. Not only is there a new book by Thomas Borstelmann, which blatantly recapitulates many of Schulman's original ideas, but in a turgid and humorless prose style, but there is also Jefferson Cowie's much better Staying Alive, and a few others. My own personal favorite after Schulman's is Thomas Hine's The Great Funk. Hine's book is unique in that it tries to make sense of the aesthetic exceptionalism of that decade - its flouting of decades old restraints in design and manners. Since Schulman's book  perhaps there have been many others too numerous to name. I've read practically all of them.

But Schulman was there first. This makes Schulman an original, an innovator in history, in my book. Time and again I see his original insight -s about the "Southernization" of American politics and culture or the shift to a local, self-help kind of culture after the loss of trust in or even existence of larger institutions and universalistic aims pop up all over the place. Daniel Rodgers took a rather theory oriented, more academic approach in his Age Of Fracture. Rodgers book is certainly deep intellectual history and it is mightily impressive and learned - indeed it was one of the most important non-fiction books of the past few years, but it is a different kind of book in its intention than Shculman's. Schulman's book is actually the kind of book that serves as the best popular history, not unlike some of Arthur Schlesinger's books from the fifties and sixties, say, or a Howard Zinn or Jill Lepore (whose new book on the history of Wonder Woman is a must read if I may add a plug) This makes Bruce Schulman, though not a household name, a public intellectual of sorts. He writes the kind of clear and entertaining prose that too many historians shy away from out of a mistaken belief that it is less valid or serious. Here he is giving his take on the meaning of Martin Luther King's famous speech.

In this all too brief sample of Schulman discussing the meaning of Martin Luther King, we see that Schulman's work on the 1970s is marked by a moral seriousness. When he talks about popular culture as he does at length in The Seventies, it always for some very good reasons, and not as an honorific to the popular status of the works he reviews.

Back in 2003 when I discovered his book I did a lengthy interview with him. It was interesting to revisit that article, a scanned excerpt of which is found below. 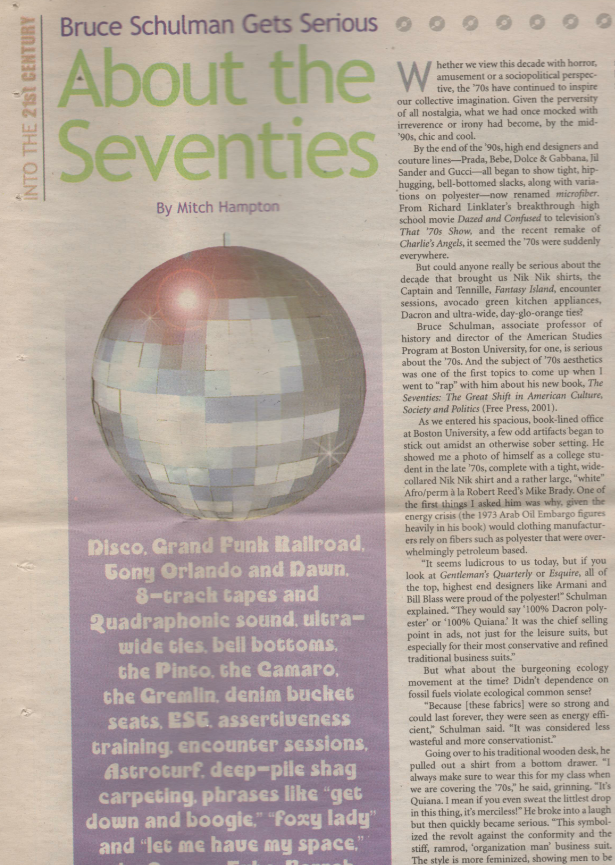 This is the only copy that exists of that. For a good twenty-five years I was a staff writer for a really decent periodical called Organica which is now sadly defunct. They gave me a lot of freedom, and used that freedom to spread the word about Schulman's new and exciting thesis about the centrality of the 1970s to subsequent decades. This is the shift to a "symbolic politics" and an increase in a decentralized ethic, and an abandonment of larger civic purpose and larger institutions.

Of course there is the "lighter" side of the decade, if that is the word for it.

Here is an excerpt from that page, if you cannot make it out from the picture.
"It seems ludicrous to us today but if you look at Gentleman's Quarterly or Esquire, all of top highest end designers were proud of the polyester. They wold say '100% Quiana. It was the chief selling point in ads, not just for the leisure suits. but especially for their most conservative and refined business suits."

If there is anything that perfectly illustrates this feature of the decade it is this ad I came across most recently. Now if there is any fabric that epitomizes the virtues of natural fibers it is tweed, specifically wool, yet here is Johnny Carson modeling his line of tweed and proud as a peacock of the fact that it is a synthetic tweed. 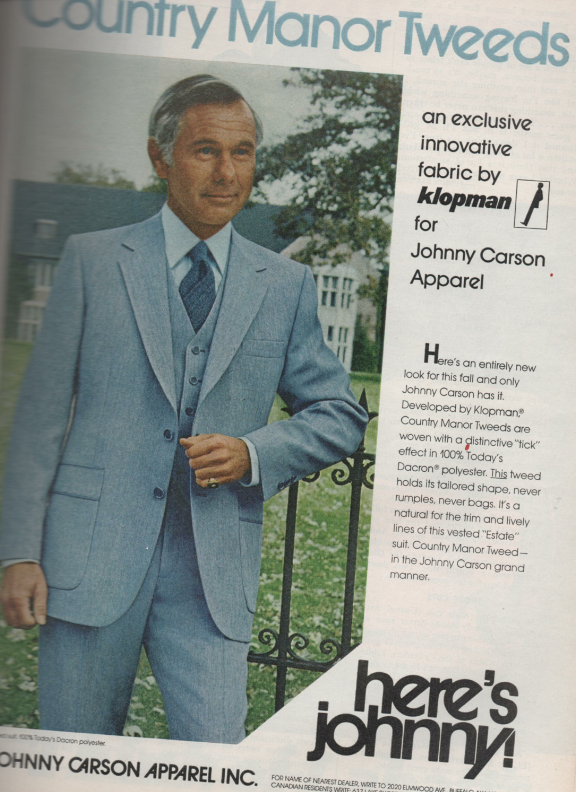 Of course after the obligatory design elements are scrutinized the decade resonate even today in all sorts of ways. Schulman teaches at Boston University and we had the opportunity to have a reunion of sorts at the close of 2014. The foremost matter on my mind was how his students have changed over the years.

"One of the new things is that what you used to be able to rely on (students knowing) you can no longer rely on. They can be very smart and sharp and analyze texts well but you can't assume knowledge."

"Sometimes I will show something with absolutely no introduction and no identifying information. For example the famous Stanley Forman busing photo from 1976. And the results are interesting."

To this day Schulman's text continues to regularly sell 1,500 to 2000 copies which is encouraging. One thing of which I am proud was giving Schulman the idea of using the overlooked, underrated comedy How To Beat The High Cost Of Living as an example of the economic situation of the 1970s in popular culture.


Another new insight I learned from Schulman is one concerning sensibility, a matter that should definitely interest the fine folks over at the Society For U. S. Intellectual History http://s-usih.org/.
This concerns the emotional manic-depressive character of the 1970s. Too many films that are set in the those times are only manic and miss the depressive aspect. I think for Schulman Boogie Nights and The Ice Storm were exemplary in this regard and last year's hit, American Hustle only hit the manic mark. Manic depression is an interesting way of looking at a sensibility, not as a scientifically proven diagnosis but as a metaphor.

These days Schulman's research has him going back to even earlier periods of historical time the years from 1896 to 1929, his contribution to the Oxford History Of The United States. Schulman expresses great curiosity and even a sense of awe at what he is learning, things he did not already know.

That is the best thing about the life of the mind. It is a joy that it is never boring and never done, and there is always more to learn.

Above all I have Bruce Schulman to thank for introducing me to Richard Hofstadter way back in 2003. He was kind enough to lend me Anti-Intellectualism in American Life. That too is a book that never seems to be out of date.

My only regret is that the film Selma had been released when we had our early fall reunion, if only so I could get Bruce Schulman, an L.B.J. scholar and author of an important text on Johnson, to respond to that newsworthy current release.