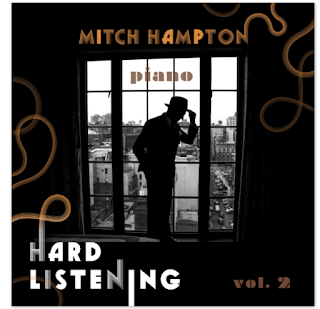 I came across an interesting bootleg of one of my musical heroes - Freddie Hubbard - during which, in one of his spoken introductions in between numbers, probably in frustration with a noisy audience, he said "I think we should let the music speak for itself." In general this has always been my position. It is one of the reasons that I devote so little of my life to reading theoretical musical scholarship and musicology and theory. I would much rather listen to the music of actual musicians and composers  study the music itself to learn new ideas or retain old ones.  The only reason I have written so much recently about my "hard listening" music series is that there is a self consciousness to my project and, above all, that my music is indebted to so many truly great musicians who continue to inspire me, almost too numerous to mention here in one sitting. Also, as my music is partly "conceptual", I have wanted to describe the stylistic elements of the musical languages that I love to use.

This is my second all solo piano album. A lot of work goes into such a thing. Not only is it a matter of the physical practice of the piano itself, but, even more,  it is a matter of formal and conceptual work: much of the album is about structuring musical pieces, deciding how much to write out and how much to improvise, balancing the mood shifts both within one number and from one number to the next, and so on.

But equally, if not more importantly, an album like this is also the work of others. John Weston of Futura Productions is a perfect audio engineer and helped produce the album. I love working with him every chance that I can get.

I love the photography of Hannah Cohen https://www.hannahcohenphotography.com who took a photo that formed the basis of the cover. I have worked with her many times in the past and always with the best results. Amanda Williams Galvin is such a tasteful and individual art director and I was immensely happy with how she created the feel and look for the cover. Also included is a photo of me that is actually part of an ongoing/new art project concerning me and my love for the 1970s. The photo and the art project is by Laurie Jill Strickland, an artist who does so many things - writing, acting, producing, coaching, show creation, vocal arts, performance - that I would not know where to begin except to refer the reader to her truly beautiful site here. http://www.grayceproductions.com I wanted to thank these people as much as possible since there would not be a recording without them.

I think I have said most of what I wanted to say about my music on other posts. I am most excited by the long piece that introduces the album, titled Still Night Suite. Like everything I do I start with one idea, in this case a previously composed Cole Porter classic, and seize the opportunity to do as much as I can with it. As always there is the interest in "time travel" and differing musical styles rub against each other, sometimes harmoniously, sometimes abrasively, but always with the aim of dramatic contrast between one emotion and mood and another. I like my music to move in more than one meaning of that word. I am partial to conscious anachronism. Although much of the music on this recording reflects my attachment to older musical styles there is at least one sense in which it is very much a creation of our 21st century: it is an entirely digital release. After all, we have to live in our own time even if we are not always exactly of that (current) time.

I hope you enjoy the music.
https://store.cdbaby.com/cd/mitchhampton
Posted by dandiacal at 8:07 PM No comments: