Bill Evans, Memoir, and the Nature Of Art 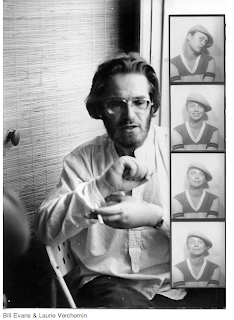 There is much truth to the ways we systematize and understand our lives. There is some truth to the labels in the latest DSM. I am perfectly willing even to concede all of the vogue words and jargon that we create to try and make sense of our lives. Having said that, I still think it is the role of art to get around, behind, and beyond such reductive forms of understanding. Nowhere is this problem made clearer than in the subject, content and potential reception of a valuable and well written memoir by jazz pianist Bill Evan's last (literally to the deathbed) and younger lover Laurie Verchomin, The Big Love.

The problem stands in relief because in this tiny work of art in prose Verchomin takes material in her content loaded with traps to snare those who would approach it with preconceptions and stereotypical assumptions - Evans' chronic cocaine abuse (evidently he was never not on drugs for decades), the fact that a much younger woman chose to be with him until his death and care and comfort him, the way the author negotiates the painful contradictions and joys of the 1970s sexual revolution - and makes all of this content a means by which she communicates not explanation or even understanding but experience in the sense that the better art communicates experience.

She is also working in a much maligned form. Memoirs are enormously popular (in part for the worst of reasons, say, an overt belief in "the truth" or an excessive interest in certain fashions) some feel that there are too many of them, it is associated with charges of self indulgence, celebrity culture, the evasion of artistic and literary seriousness and much worse besides.

Yet, as I have stated many times before, genre - in this case I suppose the label would be a "coming of age" genre - is not always the most useful way to understand literary or any other kind of art. A better way to understand art is to ask if we are changed somehow after expreriencing it, if it opens up newer forms of experience to us.

One of the reasons for the mistreatment or suspicion of memoir is that both audiences and critics make a whole host of assumptions about what consists an art object, what is the role, if any, of narration, point of view and other issues.

The other reason is pure sexism in the old fashioned Feminist sense. That is, many of the concerns of the memoir are concerns authored and experienced by women. Since historically such concerns are deemed of lesser importance than, say, a traditionally plotted novel, or an objective biography of a musician, this bias can only work against a memoir written by a woman.

Verchomin's The Big Love is one of the most unusual experiences I have ever had in reading creative non-fiction. It is poetic, emotive, and compressed and distilled. Set in diary form, each sentence or paragraph is both austere and dense at one and the same time.

The great ballad "Laurie" as heard in the youtube selection was written by Bill Evans for her.

As a jazz pianist and lover of Bill Evans my perspective is surely biased: the content of the book is inherently interesting. But even more interesting is the complete lack of moralism (as distinct from true morality) and complete presence of compassion in her book. Every day that is covered reveals a very young woman coming of age and also reveals a Bill Evans slowly dying all the while performing, arguably the greatest music performances of his career. (I am often reminded of Edward Said's book On Late Style). Evans' late playing is exuberant and unafraid; it has the rawness of a scene from a Cassavetes movie yet the form of an old melodrama. Verchomin's artistic and aesthetic strategy of using bits of poetry and the journal form as we stay with the experience of this young woman and this far older celebrity and greatest of jazz artists on a daily basis has a directness that would have otherwise been unavailable to us had she travelled a more worn path.

It is admittedly disturbing the passages that creep upon the reader. As we read we get deeper into the consciousness of the subjects. It is almost as if Verchomin is challenging us to think about ethics and human relationships in a deeper way. I will be reading her book and come upon a piece of information about public people, yet the innocence and tone of the delivery works against the severity of the information. For example:

"Bill's other connection is Sam DiStephano who manages the Chicago Playboy Club. He sends over two former playmates (now a lesbian couple) to keep us company at the hotel. One is really tall and the other is short like me.

Bill asks them to find some cocaine. We went back to their apartment to wait while the tall one went out to score. I loved their apartment. They had this great writing-partner desk, where they worked on their careers as writers. And Tony Bennett had given them matching walkmens so they could think of him while they were having sex".
The effect of the passage is startling because of the reporting style mixed with the point of view of a young woman from Canada.

There is no greater case to be made for the supremacy of style in how art makes meaning than in The Big Love. Verchomin's "voice" and rhythm is everything. After many weeks of reading about the wildness of 1970s culture it is a nice to come upon purely musical examples such as Bill Evans' understandable love for Earth Wind and Fire, or more personal passages where detail and rhythm are all important:
"I am Ellaine, because she is so much stronger. I am drawing on the strength of her tenure as Bill's first wife. The woman who ate nothing but Haagen Dasz coffee ice cream for two years and then broke her fast with sushi. The woman who gave birth to twin Siamese cats, which they named Melody and Harmony. The woman who lay beside Bill for years and years, in candlelit apartments without electricity, yet keeping sacred the art of television with an extension cord strung out into the hallway".

At other times she writes about Evans' musical style:

"No one recognizes the melody; the discard has his head rearing up, an angry mane of thick grey hair framing his broad forehead,eyebrows raised in astonished agony.

Here is Bill, crucifying himself. Finally exploring his suffering in public, no longer able to control his passion, freely expressing the distortion he is directly experiencing."

It is direct experience that is one of Verchomin's themes, as well as a good phrase for the style in which she writes.

As the book keeps building the sense of repetition, by the book's end we are not quite the same as we were when we started. We are in a place where the usual categories do not apply. In my view there is no better place for a piece of writing to take the reader. We are constantly having to readjust ourselves our sense of what music and the music making process is. We have to constantly readjust our preconceptions of drugs and sexuality.

The Big Love is a short book. It is concentrated, precise and sharp. But it is a creation of pure love. It builds to a powerful and inevitable end that seems far vaster than its surface size. It is unabashedly spiritual and mystical and never downplays such interests for the sake of a purely secular or scientific culture. The Big Love it is a must for anybody involved in jazz and certainly for anyone interested in the history of the 1970s, and, above all, anybody interested in the subject of female experience in the twentieth century.