Philosophic Reflections at the Close of 2012 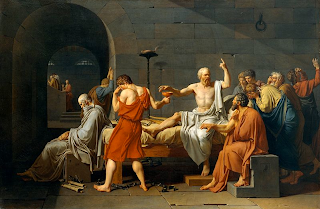 I have often praised the prosaic and the quotidian in these pages. I feel our preference for and privilege of the Tragic and dramatic is a kind of sin at times, a defect in how we perceive stories (or that we perceive in stories) and understand our lives. We may think we need the large revelatory moment and the heroic moment but it is extraordinary how much we distort and what great beauty we miss in the process.

Yet the world's events increasingly appear to demand such an outlook in extremis. (Though a part of me thinks we actually cause these events in order to fulfill this preference!) I can't nor won't write on the seemingly daily horrors that have been hitting our "so-called civilization" (in Gandhi's formulation). I shall leave the writing on that truly evil event in Sandy Hook, Connecticut (and President Obama was so wise to invoke the conception of Evil, though it is a risky and at times misused formulation, especially as we live in an age so glib and assured in an empty and easy type of secularism) in the hands of those close to it, those professionals more knowledgeable than I, and others who have a gift or strength of empathy that I believe to surpass my own powers. And I don't want to contribute anymore to the sensationalism that may engulf it.  Even if it is statistically rare in some dimwitted and overtly quantified Utilitarian sense, if we are at all alive to its horror, we surely feel an outrage such that one Event like this is always one too many. It is too common for many of  us to bear with any sense of basic or decent humanity.

My standpoint  on my blog has always been one of reflection and embrace of infinite and eternal mystery.

One good thing to do when the world seems to be falling apart, and it can only be done when you and the people in your immediate environment are not being killed or attacked, is to take time and reflect or meditate: apart from reading spiritual wisdom like Yeats or great religious meditations and teachings as in the Sermon On The Mount, it might be good to stop action and dwell upon ultimate matters. I want to discuss some ultimate things, hopefully in a way that preserves their mystery. We need to explain when challenged by unfathomable violence for example, but we also need to dwell in mystery too and deal with the most important questions of all: the APORETIC ones that are designed not to be answered but to express inquiry, to churn around, and ultimately lead to deeper or better questions.


It goes without saying that, with the media attention on crises, wars, crimes, storms, and the like, coupled with a relentless celebrity culture, we are encourages to further and deepen our attention to such drama, especially drama that does not directly affect our immediate environment.

Rather than ask why this tendency might be the case, and I will simply assume it is a negative tendency for the moment, it is better to ask questions of a more ontological nature. Especially during a holiday season. Jesus Christ and the religion He is said to have founded is completely predicated on such questions. All of Christ's teachings are rather like one great question, much more than specific prescriptions.

Rather than dwell on the evils of the past week or year or be desperate for salvation and answers I think it is best to ask what and who it is we are.

What is the human being?

Now of course Socrates would go around and ask what Justice and Love are and other ultimate matters. But all of us should take time to ask those questions. For one thing, when we ask such questions we are put into a certain relation with ourselves and others which is objectively superior to many of the alternative kinds of relations. We aren't trying to sell something and our very question implies that we aren't experts and might be uncertain or wrong.

If you ask such a question you will find that you will always already be brought to a less than violent place. You will become aware that as people we have a certain self regard. Conversely, to go through life and to never ask the question, or, worst of all, to come with readymade answers to the question even if the answers are ethically unimpeachable or pure is insufficient at best and wrong at worst. There is the risk that you will not see who is in front of you when you meet someone new for the first time, but also the risk that you will be very busy evaluating, ranking, and possibly discarding some people according to your prior blueprint. If you do have such a blueprint, that is perfectly alright, but at the very least be honest about your blueprint and that it is a blueprint and know what you are doing. Don't mistake your blueprint for a universal Law unless you are absolutely sure it is a universal Law. Be cautious about making your claims objective for all times, places, and all people.

One of the virtues of young children is that they are always asking questions like these. Even better, because they have not developed shame, defenses or ideas about what is cool or uncool about certain questions they often ask some real good ones as demonstrated in a crude and simple way in this television show: The Courtship Of Eddie's Father, starring the late, great Bill Bixby.


When I was in college, specifically at the New England Conservatory Of Music, people often teased me about my insatiable curiosity; moreover they seemed amused that I would ask childlike or even childish questions. As a response I wrote a jazz composition titled Why Is That? to capture my inquisitive nature, in an act of self deprecatory defense. It is at once the simplest two part writing piece possible, quarter and half notes, but I snuck in some harmonic complexity nevertheless. 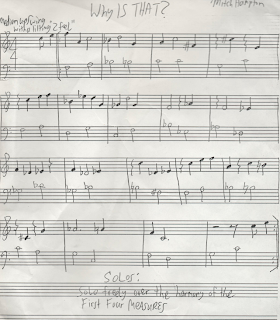 All of which is to say that one is never too old to ask questions, good or bad, and that curiosity should never die with the dullness and even jadedness of age. And that the kind of Aporetic questioning I defend might just very well be another form of what is normally called Love.
Posted by dandiacal at 4:42 PM