Notes Towards An Aesthetic of 1970s Cinema: Chantal Akerman's News From Home and The Power Of Location 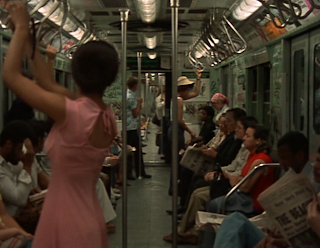 In 1970s cinema and aesthetics more generally the power of place comes to the fore; never before has environment, in all senses of the word, been seen as equal to and constitutive of individual or collective human identity. Of course there was great precedence. For example, in the European art cinema of the 1960s - above all, Antonioni - location and place became most important and the entire traditional assumptions of foreground and background were called into question. In addition, the documentary tradition was also very interested in environments, in particular the urban centers.

In the 1970s all of this is pushed to the absolute limit. As I have suggested before,http://themoderatecontrarian.blogspot.com/2012/08/notes-towards-aesthetics-of-1970s.html artists in the 1970s were surely aware, if only unconsciously, that there was something exceptionally weird and at times outrageous about the design of the period, and that awareness must in part account for the level and focus of attention on both location shooting and the environment during this period. It was as if the filmmakers, even in nominally fictional works, wanted to document the curious and striking look of the times: the environment people created and found themselves in became less background and more foreground. Also emphasized were the attire and accessories with which characters, whether fictional or nonfictional, wished to present themselves. It is not merely a budgetary issue (the cost of recreating with a semblance of "realism" the look of an actual historical period or contemporary city) nor a technological issue (the excitement over new techniques of shooting on location): it was above all an aesthetic issue: the question of style and meaning, as in any artistic decision. Understandings or evaluations of this 1970s visual aesthetic that look merely to economic or infrastructural causes, as in the lowering of budgets, or the invention of the steadicam etc., are  inadequate at best.

In the past, when discussing 1970s film and/or visual culture, I have included many works that would fit neatly into a commercial designation. In this latest installment I am including a conspicuously non-commerical work, indeed one that would be considered thoroughly artistic. I have in mind Chantal Akerman's News From Home.

When it comes to films that can lay claim to documenting the styles and looks of the 1970s none is more definitive than this film.

I can't be coy when it comes to this gem of a movie. It is a masterpiece. Firstly, it is one of the great films of and "about" New York City, easily ranking alongside The Naked City, Dog Day Afternoon and In The Street. One reason it may not be so regarded is that it is in almost every way unlike a traditional narrative film.

The entire film consists of the audio of a woman reading letters from her mother from back home in Europe, in a heavily accented English and in a formal and a times reportorial tone. The content contains all of the qualities that one would expect from a letter by a mother to her daughter living in another country, in this case the United States. Simultaneous with this audio is the visual of different public transportation and street scenes of "real", that is, ordinary, nonprofessional people going about their business in the hear of New York City. The people we see and/or witness appear as if in an unrelated film and in appearance and manner appear different from the ostensible intimacy of the letters, since the spaces are public and "anonymous".

This is literally all that happens in the feature length film.

Over the course of the film the mind wonders and wanders and just maybe one will think about the relationship between this European voice reciting accented, not always decipherable English (and the audio is purposefully kept low at times) and the faces and bodies we see. The film is humanistic in the tradition of older "realist" painting, a comparison I have not seen any critic make. In this sense, this very formalist and structuralist film has a fiery heart at its center, but its emotions are not so specific and specified. It is something of being dislocated, of living in a foreign country. It is something of being a mother or a daughter. It is something in the nature of letter writing itself.

The so-called "classical" Hollywood period of American filmmaking, a list of names including but far from restricted to King Vidor, Raoul Walsh, John Ford, Howard Hawks, George Stevens, Billy Wilder,  Alfred Hitchcock and Frank Capra, Nicholas Ray and Robert Rossen, (again to name only a few) was one of the greatest periods in the history of all Western Art. Nevertheless, though my praise is most high for these figures, there are many radically different and equally valid ways to make a film.

Because of the "template" set down in that period many unsuspecting viewers, including critics, have a rather narrow notion of what a film is supposed to be and look like. Partly in response to this situation critics, and some artists, coin terms like "structuralist", "minimalist", "avant-garde", and perhaps the worst of them all, "experimental", to categorize these differing, "difficult" (and to some eyes and ears simply boring) artistic and stylistic strategies. One book on Akerman considers her a hyperrealist, whatever that may mean. (Though to be fair, Ivone Margulies' book has much that is good in it, and it is, after all, a full length book on Akerman). For me she is simply a filmmaker and one of our very best.

News From Home is really nothing like any of those Hollywood films and is a lot like certain avant-garde films. Akerman's more famous and accessible Jeanne Dielman is actually much closer to Hollywood in certain respects, especially the films that centered upon melodrama or female protagonists. News From Home is much less Hollywood. (Though whole chunks of News From Home could have served as the background in many an action film from the 1970s). Akerman acknowledges the influence of the so-called avant-garde such as Michael Snow and Andy Warhol, yet the film is so much a work of absolute cinema, a work of viewing people, places and things. (Indeed both Snow and Warhol belong to cinema as much as Hawks or Rossen).


Here is my blunt principle for all the writing I have done and will do on all works of art: the absolute gold standard for understanding and evaluating any work of art, from the lowliest commercial advertising illustration to the highest Henry Moore sculpture (or Akerman movie) is how we feel about its sight and sound temporally, as we are experiencing it. All other considerations i.e., cultural allusiveness, intertextuality, historical context and so on, while at times important are still secondary to this experience as it is lived in time. One technical word for my approach is phenomenological.

Looked at in this way, all art is perceptual, whether its artists or creators wish to complicate or contest perception and go by the word and label "conceptual" or not, and however much discursive and textual stuff (or junk) fills the object in question. This is the totality of what we have to deal with.

In this sense Akerman's film, if it is about anything, is about the sound of the filmmaker reading her mother's letters, the emotions and sensibilities of such letters, and the shots of anonymous people in the architecture and setting of New York City. It is about the distance (or perhaps the closeness?) between the audio and the visual. Critics often write about it as if it were purely self referential, a film about film. But to treat News From Home in this way alone is to miss a great deal of its experiential richness: it is too "theory addled" an approach. 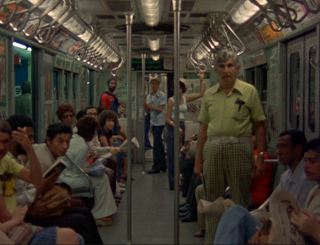 Yes it is true there is something like a "breaking of the fourth wall." The strangers acknowledge the camera. In this case the man facing us moves to another train car to escape our and its gaze. But the meaning of it is precisely the effect this has on us, and the feelings we (potentially or actually) have about it. We are the ones who are noticing it and we are going to register that it is different than in other movies we have seen. How this is achieved is perhaps secondary. We have to watch the film and deal with it, in the fullness of time.

News From Home has the second greatest ending of any 1970s film, the other ending of course being Antonioni's The Passenger. The two are similar in certain respects, in their "slowness" and in their spiritual abstraction.
It is a long tracking shot away from the New York Harbor. It is so beautiful. It is also ten minutes long.

Today's movies do not look like this. Most newer technologies take rather ugly pictures, in ways I can't get into now. It always seems wrong, either too bright or too dark.

Enjoy
Posted by dandiacal at 9:57 PM