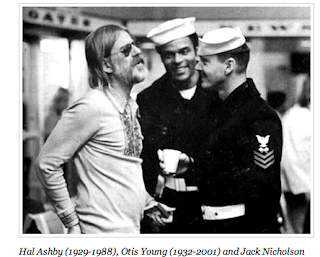 The Last Detail is a film that was created in 1974 and reflects a time in filmmaking art where the heavier cameras would be placed in the thick of real experience, in this case documenting the actual locations in which the figures would have travelled were they in life rather than in art. We are forced to witness the not always pleasant physical institutions that were created to contain large numbers of people: military bases, city train stations and bus terminals, drab diners and banal bars, public bathrooms, cheap sandwhich and pretzel stands, skating rinks, whorehouses housed in the greater Boston area, student/hippie apartments, the cheapest motel - with barely functional cots for beds, and finally, a woodsy park area in the snowy cold Winter, with no people except the three principals - all three of whom seem ill clad for such Winter, shivering in their military issue pea coats and open necked sailor’s uniforms. All of these environments are photographed in the most direct fashion possible, head on, so as to emphasize the brutalist designs of the era. This is a utilitarian and austere presentation, with just enough light needed to make everything out and no more, and the full force of the characters’ behaviors - their souls really - exposed to take center and stand out in relief.

(note the environments such as bar and streets locations)

Were the picture done today, even if the same locations were used, the cameras would be as light as is possible and everything would shake just a bit -  the vogue now for practically a couple of decades - and quite possibly we wouldn’t get the same feel for either character or environment. Films today actually get too close (for my taste) to the figures and move around them and into them, whether it is the work of the Dardenne Brothers or last year's Whiplash, and this strategy of excessive closeness, whatever its virtues,  (and make no mistake: the Dardenne Brothers are fine filmmakers but there is still room for criticism vis a vis the issues I am raising which are general and technological rather than individual) is a strategy that enables us to make emotional attachments without really seeing fully what is front of us. There is an attempt to go directly inside without the consideration of the overall frame. It is a kind of advocacy or special pleading masked as observational documentary. 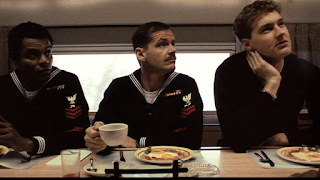 I have called 1970s cinema (and this includes both mainstream so-called commercial productions and independent or so-called avant-garde productions) a cinema that tries to stay free from conceptions. Direct expressions of the actors’ emotions and direct presentation of the environments in which they move always comes first. People do things and we have to be faced with them. We might be amused, horrified, entertained, but we will have to live through things as they are presented to us without the sweeping summaries and conceptualized condensations that have come into all of the arts of the past thirty odd years. If the characters are what we could call today sexist, or immature or macho, and perhaps they are, they are in a way that is true to the selves represented, without the safety of having theories or conclusions about it. There is a palpable humanity present. One way people often have of describing this is naturalism and authenticity etc. but those are the wrong way of talking about this because the effect I am trying to describe is found in both the most fantastic and artificial of contents as well as the most "realistic". We need a way of talking about this aesthetic that accounts for this constancy across the spectrum. 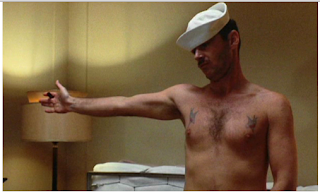 Hal Ashby, Michael Chapman, Jack Nicholson, Randy Quaid, Otis Young and the rest LOVE their people and their ugly, florescent lit locations and want us to give them a fair hearing, as a form of witness. It is one of the reasons for "Badass" Buddusky’s unrestrained joy in performing for us and performing to get the young, green and perhaps slow Randy Quaid to accept and learn from Nicholson's performance, to be truly alive and present to the moment. 1970s film tells the audience that we and the world matters: it doesn’t want to explain and analyze. It wants to present it all to us and we are along for the ride or not. If we go on the ride we will leave behind our judgements and assumptions and learn to find the world interesting as it is, in itself.

It is interesting to compare Robert Altman in this regard. Robert Altman is absolutely merciless in his criticism of many things in society yet his absolute fidelity to what he chooses to photograph works agains his own intelligent skepticism and the joy of the human comedy as a sight of wonder and fascination is the final criteria rather than any melioristic ambitions or theoretical explanations. The love of observation is there in Altman as it is in the far more generous and forgiving Hal Ashby. Curiosity is at a premium. It was as if the filmmakers were discovering the world for the first time, even given the long history that preceded them, so great was their commitment to the stylistic practice I am trying to describe here. 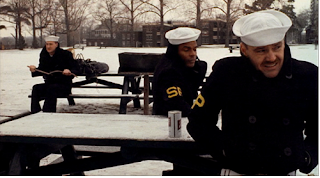