What I mean when I call myself an Aesthete - 2018 installation 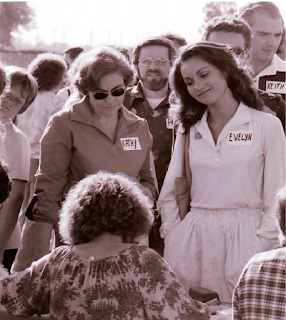 All new things are inextricably intertwined with the old, even the oldest things, however free that which is new wishes to be from the old.

Around fifteen years ago, right around the turn of the millennium, (remember the Y2K?), I underwent a transformation of sorts. It was unbidden or unwilled - or so it felt at the time. I tried to explain it then - as best as I could under the admittedly compromised circumstances - and I started using the word aesthete to categorize and conceptualize it. In truth, however many flaws we find in the notion of the category, whether we really like it or not, we all have to call ourselves something, and in most cases, many separable things at the same time.

As my interest in the 1970s is constant and ever rewarding, I am going to use Michael Ritchie's masterpiece Semi-Tough to illustrate. In this picture Ritchie has Bert Convy play a salvational spirituality/self improvement "guru" modeled after Werner Erhard. As part of the fictionalized and staged seminar meant to satirize workshops and movements of the kind in the 1970s, Bert Convy, playing the character of one Frederick Bismarck, puts on a skit demonstrating the difference between what is essentially meant to be a lower versus higher way of being in the world. To demonstrate the former Convy has an actor approach him with a cliched greeting that would be known to people in their daily lives: "Hi, how's the wife and kids?" The tone is breezy, perfunctory and the like. Convy then switches to the higher alternative. In the latter, when Convy greets the actor the two men gaze into each others' eyes seriously, even soulfully, and hold a firm handshake for longer than is usual.  No false and evasive backslapping here. Explaining the difference, Convy remarks. "See in the second meeting I am really meeting somebody. I am meeting a person! Get it?" And as is always the case, both in 1970s movies as well as life, the crowd gathered in the auditorium erupts into enthusiastic applause at this demonstration. I deal with the issue of parades and crowds in 1970s artistic culture in general here http://themoderatecontrarian.blogspot.com/2012/08/notes-towards-aesthetics-of-1970s.html 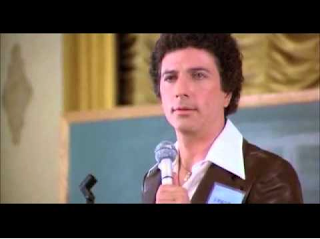 Encapsulated in this one moment in time, in the year of 1977 is a joke riffing on a constant anxiety - in both the older, Modern and newer, Contemporary periods alike - the anxiety concerning what it is to even be a self. The concern, now contested and possibly quaint, is that in order to be properly human - authentic is still the main term most in use - one must not be like a machine or robot. The whole point of Ritchie's comedy is that one can be overtly concerned about being authentic and this can be a kind of dogma all it's own, equal to the false stuffiness or rigidity the real presentation or experience of self is meant to replace. The comedy resides in people overtly anxious about getting it right, as one might say today, in "overthinking."

About twenty years after the 70s, in what is to my mind one of the most important essays of the past twenty-odd years - the practically prophetic "Concealment and Exposure" (written about a decade before the full takeover of the internet and social media) - philosopher Thomas Nagel is sharply critical of what he calls an "adolescent" American culture, in which people express too much of themselves and excessive modes of honesty and transparence undo the temperate modes of an earlier era, with its respect for privacy and belief in the goodness of a certain amount of opacity. Nagel's point is not all that different from Ritchie (and Walter Bernstein, Ring Lardner Jr and Dan Jenkins, the film's writers). If the point could be summarized, at the risk of a crude reduction, the question of there being a consensus for how we ought to behave or feel is always limited by the natural disagreements among individuals in any given society, as well as the fact that humans have a need for some matters about the self to be hidden for the sake of the peace. This is connected to notions of civility vis a vis the town square.

Yet in a real sense it is the object of Michael Ritchie's ridicule that has won the day: the older regime of reticence has been overthrown, and of course many intelligent observers are apt to say "thank goodness, it is about time", and the like. Self expression and exposure (and, increasingly, exposures by others if what is being exposed is, say, a crime) are seen as ultimate virtues and can be found around the clock and omnipresent, bound neither by geographical distance nor any coherent conception of public decorum.

What does any of this have to do with my chosen identity of "aesthete"?

Well on the most practical basis we do have to do something with all of that which is constantly churning inside of us. We can't keep it all to ourselves in raw form, nor can we exactly let it all out. Aesthetics is the practice of trying to make something of discipline out of what is inside of us, but in some kind of subtle or indirect fashion so that it is not direct reality. Only retroactively, by submitting what is inside of us to some kind of transformation or evaluation, can we get some kind of understanding or command of it all. You might think of this as a middle path between complete exposure on the one hand or concealment on the other. This is in fact what the Arts are all about.  One of the best ways to manage the exteriorization of the interior is to invent forms that indirectly communicate the interior - stanzas and paragraphs, marks on a page or screen, acted performances, sounds on musical instruments and much more. Because the forms are in a real sense "make-believe" they cannot and should not have the same stakes as matters of direct reality. It is akin to how Hannah Arendt defined thinking itself and when I say than I am an aesthete I say that my interest is precisely in such production and not on doing anything directly about the world in an immediate way. You might say I am more interested in how things feel and appear and what this tells us about ourselves than in moving from point A to point B in a practical way. Even if you will insist that my crude division between practical action and imaginative feeling is invidious or false, I still come back to the notion that we have to call ourselves something, if not may things and it is the aesthetic realm to which I am chiefly dedicated, even if I happen to be living in a time uniquely inhospitable to such pursuits as the aesthetic, or better yet, precisely because I must live in a cultural environment so constituted.

Posted by dandiacal at 7:15 PM