1970s Cinema: my introduction to a screening of BLUME IN LOVE 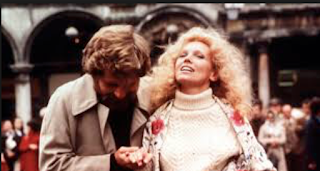 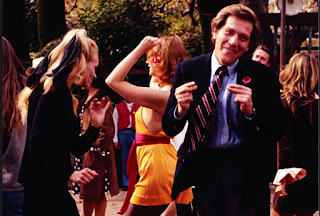 Mazursky calls his film Blume In Love and it must be said at the outset that 1970s cinema, and artistic production most generally, was preoccupied with questions of human emotion in all of its guises. If you are going to watch a 1970s movie you are going to have to, as the saying went then, "get in touch with your feelings". And further, really feel those feelings. You are never asked to actually do anything about them. That would be to create, say, "the" revolution, which, as Fassbinder famously said, "doesn't even belong on the screen".

What is important is that you know your feelings:  the feelings of both your own and others, and that these feelings be allowed to "hang out." 1970s movies are like one really long consciousness raising session.  A lot of stuff comes up and of course it isn't always pretty. Some of tonight's movie won't be pretty - it's surface beauty and sophisticated charm, of which there is also plenty, notwithstanding. The attitudes of the titular character towards women certainly can be as far from pretty as is imagined. But the important thing is he is trying. And he of course will get as good as he gives. But the bare expression of all is the end in and for itself.

It's more in the spirit of Lenny Bruce's plea to reflect on the truth of "what is" rather than "what should be."  This is one of the reasons why movies that otherwise seem to have a quite diverse or opposite surface, or come in different genres, nevertheless will immerse you in a scene, or many scenes, where a sense of real time plays out, that are, in a word, durational.

This will happen in any kind of picture, even action ones. And this happens as much in, say, Hal Ashby's The Last Detail, as it does in a Jacque Rivette picture. You see it Andrei Tarkovsky as much as you do in Sidney Lumet. And not only in scenes with more than one character: this arresting of action (or, as I refer to it in my book, immersion in the moment) happens when it lets us sit with Jane Fonda as Bree Daniels in Klute when she is by herself, or sit with Elliot Gould as Philip Marlowe as he is waking up in bed in Long Goodbye, realizing that he must feed his cat, or sit with Walter Matthau as Coach Buttermaker  in a car, possibly inebriated, in the opening of Bad News Bears.

Bertolt Brecht (and later Augusto Boal) had a chart where he said that in the classical or "Aristotelian"  theater every scene happens to serve other scenes, a subsequent or following scene, but that in the epic theatre the scene plays for or serves itself. Or, as Sherman Alexie put it in another context, "Aristotle was not an Indian." And by immersion to which I oppose what I call classical condensation, I do not mean that what we are witnessing is necessarily more naturally absorbing; plenty of the highest edited acton pictures, which are the very essence of "condensation",  could be called immersive in the sense of being riveting. I simply mean this quality of staying with the characters as they play out their lives in a present minded sense.

The reason for this in depth playing out of a scene, refusing cutting to a new one, is the conceit that in so doing the actors in the scene will reveal something of themselves and in turn reveal something of ourselves to ourselves.  1970s filmmaking is an aporetic art: it has many more questions than it has answers to, and the questions are some of the best ones you could ask. As in a Socratic dialogue these are the sort of questions that don't admit of easy definition. As in "what is justice"? Or, in tonight's case, "What is Love?" The search for the right question is always central, not any correct answer. 1970s cinema is as much an actors' cinema as it is a naturalistic photographer's cinema.

Of all the emotions, it is the nature of love that was the 1970s' great theme. What is love? When does it go right, and when does it go wrong? What is love for? It connects tonight's movie with others close in time period in particular Cassavetes' Minnie And Moskowitz, certainly Mazursky's An Unmarried Woman, only four years later from Blume, again another Cassavetes in Woman Under The Influence, Frank and Eleanor Perry's Diary Of A Mad Housewife, Lovers And Other Strangers, Sidney Furie's Sheila Levine is Dead And Living In New York. Of course in Jean Eustache's La Maman et La Putain where all of the characters never stop talking about love for all three plus hours. It haunts Kaufman's Invasion Of The Body Snatchers too: for an urgent fear of not having a genuine emotion, of losing your humanity, is a common theme in these pictures. For Cassavetes it reaches its ultimate expression in his Love Streams, a 1970s movie that simply happened to have physically a 1980s production/release date but is, as they say, stone 1970s spiritually. More recently, if you count the early 1980s as recent, Joan Micklin Silver (with help from Anne Beattie) tackles quite similar terrain as tonight's film in her Chilly Scenes Of Winter. And most recently, I can't help but feel that some of that spirit is carried on in Lena Dunham's Girls.

Blume In Love in Mazursky's oeuvre could be seen as a spiritual sequel to his Bob Carol Ted And Alice, that earlier film also being all about love. Blume's philosophic, essayistic opening continues in a different vein the popular psychological therapy discourses and concerns of that earlier film. Notice in particular the snatches of people seemingly plucked from daily, real life in the opening, the interest in documenting and commentating on life as it is lived and found and in the locations one would have found in daily life. This is the strategy of using documentary techniques in a fictional context.

Getting more specific to Blume, all of Mazursky's considerable gifts are in fullest flower: the usage of a diverse range of colorful characters for maximum emotional effect, (Just putting together George Segal, Kris Kristofferson, Susan Anspach, and Paul Mazursky in an acting role is exhibit A), a constant sense of humor about life, no matter how bad things can get, a love for all human creatures wherever they find themselves, an unapologetic almost Capraesque, commitment to affective sentiment, (and not far off from the Renoir films they have been playing here). I

In short, a point of view that could only be called humanistic if that word can be freed from any ideological, spiritual or partisan specificity. I know of no filmmakers that can get to the heart of genuine human emotion between two people (Harry And Tonto is master class in that) any better than Mazursky and he has few peers in this regard. He made his pictures for people in the audience, not an imagined ideal audience, nor a great unwashed audience that he can preach to, but potentially, well, anybody. The photographer Vilmos Zsigmond, when asked what made pictures of the 1970s special, the context being a discussion of Mark Rydell's Cinderella Liberty, said they they tried to make movies by and for people, as if people actually mattered. I sincerely hope you experience at least some of that spirit tonight since that was certainly what they set out to do.
Posted by dandiacal at 5:35 PM