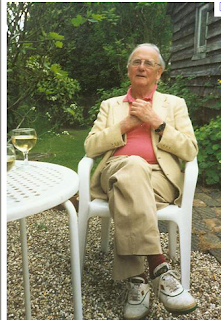 "Men in the middest make considerable imaginative investments in coherent patterns which, by the provision of an end, make possible a satisfying consonance with the origins and with the middle. That is why the image of the end can never be permanently falsified. But they also, when awake and sane, feel the need to show a marked respect for things as they are; so that there is a recurring need for adjustments in the interest of reality and well as of control"

I am now more sure than ever before that had I not become involved in serious music studies at the Conservatory and beyond I would have liked to have trained in the arts in general and English in particular. Thus it is with the greatest sadness that I learn that Sir Frank Kermode died in August. Last year it was my favorite American critic, Richard Poirier, who died. This year it is my favorite British critic who has died. As the news of Kermode is all around me, I should like to say a few words on a great man.

Frank Kermode started his teaching at the University College of London but also taught in the United States in the 1970s and '80s, at Harvard and Columbia University. He was perhaps best known as a chief Shakespearean scholar. However, as his age was one not as enamored with specialization he worked in all sorts of areas, from theology, to the implications of apocalyptic thought, from modernism in the arts to poetry of all eras. My special fondness for Kermode lies chiefly in the fact that I agree with him, both about how a work of art works, as well as how best to enter into art's mysteries. He also, as evidenced in examples here, wrote English well.

Kermode was interested in both specificity and universality. For Kermode, themes in art admitted of a certain transcendence of local conditions. This is precisely opposite from the approach of today's critics: today if you read, say, Stephen Greenblatt on Shakespeare, (in Will In The World for example), despite Greenblatt's extraordinary erudition, which is commendable, and despite the emphasis on personal biography (which might be disingenuous given the contradiction with Greenblatt's tendencies to historical, rather than, individual determinism), you get the sense that Shakespeare is some sort of "construct", but an effect of the Elizabethan period in which the plays are created. Moreover, you get the sense that England's particular culture might trump more universal considerations.

Now when Frank Kermode wrote a book on Shakespeare, Shakespeare's Language, his interest in specificity was, as announced in the title, for language. Yet this approach, (one akin to the "close reading" of the so-called New Criticism, of which I am partially a champion), is to pay close attention to the local detail - how the characters speak, the most important part of Shakespeare's plays, really - in order to finally get at global concern. Wisely, Kermode in that book also argues against a populist Shakespeare and instead reveals a highbrow Shakespeare, an innovator, an artist and poet who was difficult for his audiences and colleagues, pushing difficulty against the familiar narratives that form the basis of the plays, enlarging upon what would ordinarily be straightforward entertainment.

Above all, it is by attending to the specificity of language that anything can be revealed regarding the largest questions of human nature: How am I to live? What is justice and jealousy? What are the important differences between blood ties and chosen love? What is the nature of agency, choice, and intentionality (in Hamlet)? Such questions are little broached by knowing every detail of English life in the 16th century, or being able to delineate how different they were to us in today's time. Worst of all, in today's academe such questions have been all but abandoned, partially in the pseudo-scientific interest of playing to various audiences and their perceived differences, partially in the interest of placing pleasure at the center of life and art under the assumption that moral seriousness might simply be stuffy, alienating, or simply offensive to somebody somewhere.

Frank Kermode, during his whole career, was always interested in the widest possible considerations. Thus, in what I regard as his most important book, THE SENSE OF AN ENDING, he is not so much interested in the topicality of specific crises and the class struggles that create them - the way a commentator today would regard "the end" - but rather, in a universal need for crisis to be interpreted arising from our never ceasing temporality. Indeed Kermode's concerns could be of cosmic significance. As he best puts it, once again with the example of Shakespeare:

"What then can Shakespearean tragedy, on this brief view, tell us about human time in an eternal world? It offers imagery of crisis, of futures equivocally offered, by prediction and by action, as actualities; as a confrontation of human time with other orders, and the disastrous attempt to impose limited designs upon the time of the world. What emerges from Hamlet is-after much futile, illusory action-the need of patience and readiness. The bloody period of Othello is the end of a life ruined by unreasonable curiosity".

Kermode is interested in Shakespeare as he exists for us in the here and now, not because Shakespeare is populist or accessible, (although Shakespeare had the uncanny gift of speaking to practically everybody) but because he is a writer not beholden to the age in which he was stuck but rather aims to communicate with capacious intent.

The most interesting and contentious theme in The Sense Of An Ending is his distinction between what he calls myth and fiction. Over the past decades that have transpired since the publishing of the book, the word myth has accumulated mostly positive associations over time: partly through its role in popular psychology and various forms of Jungian scholarship and non-fiction commercialization, and partly through readings of artwork or artwork itself which sees myriad possibilities in myth as a positive, indeed necessary force. Kermode saw things otherwise and in his dissent was actually going back to a far older view - that of Philip Sidney in Sidney's Defense of Poesy - a view that attempted to see value in art precisely because it parted company from propositional beliefs or sacred touchstones. As far as fiction and myth goes, I'll leave the distinction to the master himself:

"Literary fictions are not subject, like hypotheses, to proof or disconfirmation, only, if they come to lose their operational effectiveness, to neglect. Myth operates through the diagram of ritual, which presupposes total and adequate explanations of things as they are and were; it is a series of radically unchangeable gestures. Fictions are for finding things out, and they change as the need of sense making change".

These are strong words indeed. (But the casual, offhand critique of Northrop Frye, another great critic, is amusing: that is, if one accepts, as I do, Kermode's distinction). But it is important to understand that Kermode is really discussing literalism rather than myth per se, or rather, if he can be faulted in his account, if we wish to save myth from Kermode, Kermode is emphasizing the ossification and rigidity of myth into its uses as courtesy or, worse, servitude towards the past.

This is a rather different criticism of myth than the sort of thing one encounters in the Marxist or anarchist tradition, which sees in myth a synonym for mystification or ideology. Ironically that tradition is just as stuck in mythic (or unduly symbolic) thinking because it is concerned with the discovery of truth and falsity rather than the special nature of artistic representation. After all, when or if a Pasolini or Matthew Barney uses myth, it is in Kermode's sense for the most fictive and non mythic of purposes.

Kermode is aware of the appeal of myth:

"It may be that treating literary fictions as myth sounds good just now, but as Marianne Moore so rightly said of poems, 'these things are important not because a / high-sounding interpretation can be put upon them but because they are / useful'."

I take Kermode's "fiction" to be akin to representations and art in the most general sense. But today, like Kermode's mode of teaching and scholarship, the mode of being able to understand what art actually is and how it functions is in great danger of being lost, partly because of the domination of culture by news and forms of representation that are dependent on emotional investments in reporting and "documenting".

To use an example from popular culture, in a climate in which evidently David Letterman and a whole host of otherwise averagely intelligent people could not tell that Joaquin Phoenix was blatantly putting on a performance on a talk show, and that he was "in character" for purposes of rather dark and awkward comedy, (a conclusion that could be gleamed just by the sheer weirdness and excessive calculation of Phoenix's performance), people have generally lost the ability to suspend concern for issues of verification long enough to enjoy performance. And this inability is after the fact that so many actors have performed pranks or hoaxes all of the time on major talk shows (the cast of Cassavetes' Husbands on Dick Cavett, Crispin Glover on Letterman, practically the entire career of Andy Kaufman)- an inability that must stem from a failure to understand the notion of traditions in performance practice. Audiences are so desperate to know the "real" actor that they have lost the ability to enter into the actor's gift of performance.

But then again, the kind of criticism Kermode practiced, criticism that aimed towards the universal, and that was predicated upon a close reading of the text rather than a constant push and pull argument between world and text, is probably dying.

But the concerns Kermode raised can't die, so long as we remain recognizably human in the sense that has a semblance of constancy through time.

Lest one thinks that Kermode was some kind of conservative, note that he was one of the first professors in England to embrace the new theorists from France like Barthes, Lacan, Foucault and Derrida. When others fought their innovations and influence Kermode championed them. Of course, when he saw the results of how they were put to use, in later years he grew to disagree with some currents of English teaching and criticism. Yet he did remark that good work was still being done. In all likelihood his criticisms had been due to some misuse of those French radicals in cultural studies and other disciplines.

It may be true that with Kermode's death, much will die with him. As essayist Adam Kirsch remarked in a piece on Kermode, (http://www.slate.com/id/2265191/), it may well be the end of an era.

Yet the vital questions remain: how to live? What is a good work of Art? What is time? What does it all mean? It was good that we had a Frank Kermode to study how some of the greatest minds tackled just such questions.

Posted by dandiacal at 9:51 PM