A Study in Contrasts 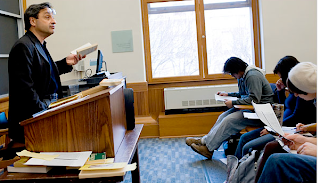 In Andrew Delbanco's treatise, College: What It Was, Is, and Should Be, he paints a study of two contrasting human beings. This illustration ends up being a representation of two models for a human being. I repeat the passage in full, firstly because it is so perfect an image upon which to meditate, and secondly because I want Delbanco's writing to be experienced in some measure.

In the passage, Delbanco imagines that two college roommates attend a local production of King Lear:

"...when it is done, one of them comes out of the theater saying, 'You know I've seen it done better; let's get a beer,' or, 'I don't know what all the fuss is about; this guy had it coming, he's a real whiner.'


Meanwhile, the other young man has had a devastating experience. He doesn't know why or how, but he finds himself thinking about his own father-about the obligations of children to parents and, for that matter, parents to children; about the savage sadness that comes upon many people in their broken old age; in fact, he finds himself thinking about every aspect of his life in a new way. Does he want children of his own? If so, how will he bring them up? Maybe he thinks about becoming a physician; or maybe he's decided to call home to see how his father is doing, with whom he's had a difficult relationship; or, more likely, he doesn't know what to do but feels a sudden conviction about his plans and priorities that need to be revisited and revised. One thing he knows for sure is that he doesn't want to end up like Lear wandering alone on the hearth. In short, the world has been transformed for him while it remains utterly unchanged for his friend. And yet they have heard the same voices and words, seen the same bodies and props moving about on the same stage, or, to put it in mechanistic terms, experienced the same aural and visual stimuli.


It is impossible to say why something so important has happened to one of these young men and not to the other. Their SAT scores may be identical. In fact the one whom the play leaves unmoved may have higher scores and better grades and better prospects to make the dean's list. The difference between them is immeasurable by any testing instrument, and has nothing to do with which one has studied harder for tomorrow's exam on Elizabethan drama. While most of us who work in education today have no language to account for this mystery, that does not mean the mystery does not exist?"

But is it, I ask, a complete mystery?

I want to make some comments on Delbanco's fictional portrait. Firstly, I should note that, the next time an interlocutor talks in the discourse of there being infinite, multiple interpretations of texts, or there being no interpretations that are more or less informed, I would respond that the second figure here - however "naive" he may be as a reader, is nevertheless interpreting King Lear in a more or less correct way. Indeed, he is reading King Lear better than some notable English critics! Secondly, in this one passage, Delbanco seems to be distilling the essence of what I have been discussing, in one way or the other, on all of the blogs I have written since the inception of The Moderate Contrarian: the question not only of value and what is, in fact valuable, and how, but of the problem of or question of a loss of appreciation of the arts more generally, and what this loss actually means.

We are in a particular cultural moment during which it is all but taboo to make certain kinds of judgments. Unless someone is convicted for armed robbery or rape, or has cheated on their spouse we feel it is impolite to evaluate them. Of course our culture is hypocritical, since our mating and marriage practices and institutions, as well as our job hirings, are often based on ruthless evaluations, necessary or otherwise. So it is with inanimate objects: we think of them as merely subjective entities, so that, if anyone deems, as I would, The Hunger Games unworthy of study but Charles Burnett's masterpiece Killer Of Sheep worthy of multiple viewings and discussions and great celebration, I am merely expressing my age, or my time, or my taste.

Delbanco's passage leads me to some conclusions. Though he speaks at the end of mystery, it is not at all a mystery how we are to respond to his two representatives. The first figure is, at least on the limited information given, profoundly limited. It is what I would call an aesthetic , or if you will, a spiritual limitation (for the two are more deeply connected than either the religious or secular would care to admit). He might be, as Delbanco points out, good at school, and a decent fellow, but he is missing something of the most most profound value about human life, and the Shakespeare play acts as a sort of Rorscarch test to determine his flaw. The tricky problem is that first figure needs to be the way he is in some way, or rather we have a need for him to be that way. Indeed, I would go further than Delbanco and say that the first man might be exactly the man we would want for certain kinds of situations. He certainly might act swiftly if such speed is of the essence. One thing that is apparent in his attitude is a certain desire to "get on with things", a practicality that some associate with America itself. Still, if there is a word that is best associated with this first man it is the word philistine. I know that I have written on philistinism before and though I see philistinism as a structural condition of the soul and not the individual property of any one human being, if you must embody it in a single figure you could do little better than the first figure in Delbanco's portrait here.

Though I see what Delbanco is getting at when he says there is an ultimate mystery as to why the second man is the way he is, or what the ultimate reason is for the contrast between the two, there is no mystery at all as to why one response to King Lear would be preferable to the other; we can state, at least in part, what the difference is in the condition of two men.

I must say that it is the second man whom we should try to emulate. His general spirit should be our "template". His response to King Lear tells us not just of his openness to new experience or a healthy curiosity: to formulate his advantage in such ways would be to fall into the very utilitarian faith in reduction and measurement that appears to diminish the first man! The second man has a spiritual advantage, which I link to my own views on aesthetics. He feels experience and reflection to be intrinsically valuable rather than as a mere means to score a goal or have a rational calculation of reality. He is also responding to Shakespeare in exactly the way Shakespeare intended for his plays to be received. All of Shakespeare - and, come to think of it, all of the best of the arts - is intended to help us to become different sorts of people as a result of our experience.

As David Mamet put it in his eulogy for Arthur Miller: "...not because the playwright has arrived at a solution, but because he has reconciled us to the notion that there is no solution - that it is the human lot to try and fail, and that no one is immune from self-deception. We have, through following the course of the drama, laid aside, for two hours, the delusion that we are powerful and wise, and we leave the theater better for the rest."

It seems to me, to be blunt about it, once we put aside the necessary, technical aspect of schooling, we must realize that it is also insufficient. The second task to which our schools should be engaged, and in which as human beings we should spend all the rest of our lives engaged, is this task of an aesthetic education. It is for this reason alone that our current trend to deemphasize the humanities and liberal arts, to see value in only that which is quantitative - in, say, environmental science or economics (though I suspect that in these two examples some artistry and mystery is involved as well!), could not be a worse mistake for our culture in general and our schools in particular. It is not just the loss of basic music education in the schools that is so tragic; rather it is the loss of teaching a certain kind of responsiveness that I associate with the humanities. Teachers should try and encourage their charges to become more like the second young man here. The second figure doesn't merely react to stimuli; though he luckily goes with his response rather than defend against it (quite critical with art) his attentions eventually expand outward to the world. Yet, even more importantly, he also submits his responses to further considerations: he wonders about his own responses and feelings, and, as Shakespeare wants us to do in every play, sees in such response, at the farthest extreme, an opportunity for change or growth, or, if the goal is a more humble one, a way of experiencing our basic humanity, without having to attend to more mundane matters.


I will always be grateful to Andrew Delbanco for this passage. It is a powerful image from which all of us can learn, whatever our position our stage in life.