A Few Words on Texture, with the help of John Cheever 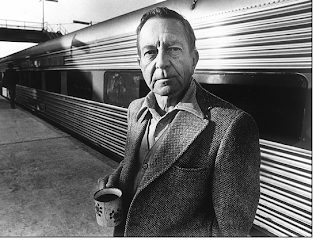 I should like to offer some words on one of the most important elements in human made things in general and the arts in particular. Normally I would mention style or tone, but here I will speak of texture as a valid critical category.

When I speak of texture I in no way am speaking of objects which must have volume and mass, or even have a visual import or representation. I am talking about something different too from tone, a quality I consider the most crucial in any art (to say nothing of life). Texture possesses less specificity than tone. One way of understanding texture is to see it as a whole overarching set of assumptions in figural or representational form (say, that things should be hard and shiny, or light and airy, for example), whereas tone is more involved in particular emotional meaning. Texture deals with the most general of perspectives: how paragraphs are constructed in prose, mise en scene in film, quality of cloth in dress. This post will consist only of one quote from John Cheever. On posts to follow, I will use other examples from the different arts.

My example comes from the opening of John Cheever short story. I feel we can only fully appreciate this marvelous passage if we empty our mind of all the accumulative contextual stuff that we think we know about Cheever. I have to state it out in the open to clear the air. We should forget ideas about affluence, suburbia, alcoholism, the show Madmen, the sociology of the suburbs, his daughter Susan Cheever, what John Cheever's letters say, what Queer Theory has to say, his alleged bisexuality and the rest of it.

Now that I have gotten that out of the system we should proceed to the work. Not that those elements are unimportant. They might serve as a useful way for Cheever to get started, as initial generation of his electricity. But a passage like the following cannot be reduced to such discursive, conceptual notions. Moreover such concepts such as the ones in my list will prevent us from fully entering into Cheever's art, in essence feeling fully for his creations. Indeed its very existence is an explicit challenge to any attempt to contain it, so full it is of exuberance for the subject at hand.  What I am interested in Cheever is precisely what gets left out of my previous list. I have a feeling that what is left behind was what finally most interested John Cheever as well.

Reading the following passage makes one want to inquire about an entire mode of writing and its affective powers, its relationship to the reader. What does it mean that prose of this kind is no longer in great evidence? It surely cannot be that our times demand a different or more knowing kind of prose. I think the matter is quite the reverse: it is that we don't regard the texture of prose in the same way and we have given to prose a new set of work to do.  The times are what they are: the texture of art is a choice and it is only because we believe in notions like relevant and the appropriate - believe as the most fundamentalist believer does - that we see a reduction in a certain kind of prose. We brandish ourselves as worldly-wise and place older modes that appear to us as less informed into the category of  History: that which belongs to the past. We would do well to remember Faulkner however, who said that the past is never past.

Here then is the opening of John Cheever's "O YOUTH AND BEAUTY!"

"At the tag end of nearly every long, large Saturday-night party in the suburb of Shady Hill, when almost everybody who was going to play golf or tennis in the morning had gone home hours ago and the ten or twelve people remaining seemed powerless to bring the evening to an end although the gin and whiskey were running low, and here and there a woman who was sitting out her husband would have begun to drink milk; when everybody had lost track of time, and the baby-sitters who were waiting at home for these diehards would have long since stretched out on the sofa and fallen into a deep sleep, to dream about cooking-contest prizes, ocean voyages, and romance; when the bellicose drunk, the crapshooter, the pianist, and the woman faced with the expiration of her hopes had all expressed themselves; when every proposal-togo to the Faquarsons' for breakfast, to go swimming, to go and wake up the Townsends, to go here and go there-died as soon as it was made, then Trace Bearden would begin to chide Cash Bentley about his age and thinning hair. The chiding was preliminary to moving the living-room furniture. Trace and Cash moved the tables and chairs, the sofas, and the fire screen, the woodbox and the footstool; and when they had  finished you wouldn't know the place. Then if the host had a revolver, he would be asked to produce it. Cash would take off his shoes and assume a standing crouch  behind a sofa. Trace would fire  the weapon out of an open window,and if you were new to the community and had not understood what the preparations were about, you would then realize that you were watching a hurdle race. Over the sofa went Cash, over the tables, over the fire screen and the woodbox. It was not exactly a race, since Cash ran it alone, but it was extraordinary to see this man of forty surmount so many obstacles so gracefully. There was not a piece of furniture in Shady Hill that Cash could not take in his stride. The race ended with cheers, and presently the party would break up."


We must immediately remark that there is, to some eyes, something of the pathetic in the spectacle of a middle aged "Cash Bentley" reliving his glory athletic days for the amusement of his fellow affluent suburbanites. All of which leads us into Cheever's genius which partakes of a certain Balzacian or Flaubertian naturalized view of a scene, a whole way of life. Note he says "nearly every long party", "the ten or twelve people always remaining". There is a detached, objective quality in this, not unlike what Jean Renoir will do in his ensemble set pieces in films like Rules Of The Game or The Golden Coach. There is the sense that everybody is doing these things specific to a whole way of life. He writes "the chiding was preliminary to moving the table." There are certain types: "the crapshooter, the pianist, the bellicose drunk." The cumulative result is a kind of texture of a certain lifestyle.

Where Cheever is unique, I think, in moments like this, is that the people he is depicting are his people, in his neighborhood. In this he is not only objective but subjective for he is one of them and he partially tries to bring the reader into this neighborhood. As such, it is implicit in the prose that there is something actually universal about his admittedly narrow social milieu.

And last, but not least, there is an elegiac quality. Cheever loves these characters with his whole heart and soul. There is a naive kind of compassion that I think is rather American and for which there is great misunderstanding and misreading by certain readers who wish for a harder, cynical social satire.  It is the latter approach - that of Madmen specifically - that is so favored these days. The chief reason Cheever rises above the merely critical and skeptical is that Cheever actually sees something of faith and admiration in Cash Bentley's dreams. (This respect for dreaming connects a lot of Cheever's figures and connects Cash Bentley deeply to the hero of The Swimmer, for example.) This notion of a dream realized in prosaic or earthly, sometimes banal guises, and this notion that the dream must be realized while wrestling with community is a notion that is important to American arts and letters: community is both a source of meaning and feeling as much as emptiness and alienation. (It is in Hawthorne, Pynchon, Toni Morrison, in lots of places). Cheever achieves all of this through his language: though he offers a list of various items, he nevertheless combines such list of details with a specific affect. Of course such a strategy on Cheever's part leaves him open to criticism for real skeptics: those that see in his "WASP" characters nothing but error and privilege. Yet I would argue that all the very best writers have a similar attitude towards their subjects, whatever nation or status they happen to inhabit.

The general loss of Cheever's belief in a kind of sustaining dream is one of the reasons why writing like this is so rare these days. Few of us "believe" anymore in the way that Cheever did. This is not because we can't, but rather that we have given up or have chosen not to.

Any recourse to the zeitgeist will not do to justify the absence of this social lyricism from todays "realists". Rich Moody opens his novel on suburbia, The Ice Storm, with a direct address to the reader: "I am going to dish you this comedy about a family I knew when I was growing up." Moody then proceeds to list all of these technological and cultural differences between the 1990s and the 1970s. ("No answering machines. No call waiting.") There is the same use of a panoramic list, but the effect is completely "wised-up". I liked The Ice Storm; yet we are in a world, stylistically rather removed from Cheever. Rick Moody is like a young anarchist or Marxist out to kill off his parents rather than attempt to inhabit or understand them. Instead his sympathies are with the children.

Always the point of view in  contemporary art and culture is that of the children. (This is also the case, as critic Daniel Mendelsohn pointed out in The New York Review of Books, with Madmen, where Mendelsohn argues that the point of view of the show is through the often absent children, even though the jaded adults are the ostensible main figures of the series That is, the show is unable to finally come to terms with the adult leads - Joan, Don, Pegg, Roger etc. - because it is imaginatively narrowed by being from only the point of view of today's assumptions, those that would have been very young children in 1962.)