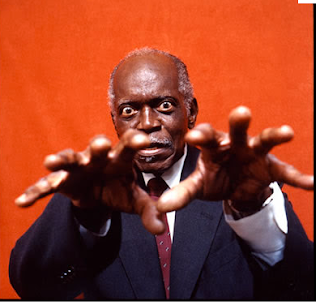 My final and third installment in this trilogy on the issue of texture in art and life consists of a single performance on a single instrument - the piano - and by one of the greatest jazz artists on that instrument in the 20th century - Hank Jones.

This will be a consideration of varied and contrasting texture in improvisation and compostion based on popular original material - the theme of Ray Noble called The Very Thought Of You.

The immediate overall issue in Jones' creation is a sense of utter completion. Texturally this is a realm of symmetry, balance and fullness. The roots of the chords, the harmonies, steady rhythms and the lead melody are all represented with all the richness the piano can convey. The effect is at once orchestral and pianistic.

Jones' contribution to jazz piano is his blending of pre-Bebop swing era and Stride styles of Fats Waller or Art Tatum in the thirties with the modernity of Bebop. Jone's gift more  particularly is in his exquisite touch. His touch is unafraid to be precious, crystalline. At times he flirts with an almost willful delicacy that approaches the purposefully tentative. In this he is at utter odds with the more hard or percussive sound of, say, a Thelonious Monk. It is not a matter here of who or what style is better or worse, but merely a fact of profound difference. This is in the very nature of jazz performance which is about making individual expression. Different styles exist for the reason that there are different kinds of men and women and that life is filled with different occasions, both for sad heaviness, joyful lightness, and others too varied to be mentioned here.

Jones starts his reading of Noble's theme with an introduction setting up the 1 and V chords of the basic harmony: a kind of vamp with root and chord. This was a device that was beloved by Art Tatum, especially in his introduction to Jitterbug Waltz, a composition originally penned by Fats Waller. This alteration of tonic and dominant or cycles of the main chords in a piece as a way of setting up or introducing a composition is heard in millions of cases, from folk, to jazz, to rock, to show music, and vocal arrangements. But notice that in his simple outline of tonic and dominant how dissonant and chromatic his harmonic renderings are. (Also a nod to Tatum). Not so chromatic that the chord types are unrecognizable, yet just chromatic enough to take us into different places, than say, if we were to hear the Ray Noble orchestra playing it at a society function.

Throughout he alternates between wildly florid passages that are at once elegant and jagged and simple melodic phrases. All throughout the piece his touch is the touch that we have come, throughout mass culture and the entertainment industry, to associate with the so-called cocktail or lounge piano: that is, music to accompany dinner. This unfortunate reduction tells us nothing about the inherent value of the music itself, other than the fact that it is potentially "unobtrusive" enough to be played while other activities are being entertained. Bill Evans once remarked on the tragedy of how such solo piano music is treated by commercial culture. But make no mistake about Jones here or  jazz piano ballad playing at its best. In truth it is an art equal to anything from the European concert tradition and equal to anything meant to be actively heard without accompanying drinking and eating. And the "touch" we hear here is a touch that is the only one to make possible certain kinds of feelings in the listener, a sentiment, and affect, that would otherwise, without this touch, be unable to be invoked.

But those are issues of reception and treatment. Let us attend a little bit to the music. At one point, on the altered seventh on the second degree of the key he indulges in some mysterious whole tone play to create tension. Note too the chromatic alterations downward by half steps during the first chorus of the melody. This anticipates the tensions that will replay later. Every time Jones gets melodically simple, he will then get "further out". When he pushes the listener away, he will reel them in in turn.

Nobody put together a series of phrases quite like Hank Jones. He pushes melodic elegance as far as is possible to push in a swinging jazz context. There is a sweetness and dignity to Jones' art that seems to embody a whole tradition of lyrical piano playing for centuries. And it is all here in this little piece.

His uses of tremelo octave to mark the rising of Noble's melody underscores Noble's own melodic genius, how Noble creates movement through the addition of rising tones from the root. Jones respects the original material as much as he wrestles with and departs from it.

In this Jones piece we have an example of texture as the highest art. It is to music what John Cheever's paragraph was to prose. And, last but not least, to think that such texture is achieved on a piano, without the diversity of several instruments that can sustain notes for long periods.

This then finishes, for the time being, some examples of the uses of texture in art and life.
Posted by dandiacal at 12:03 AM