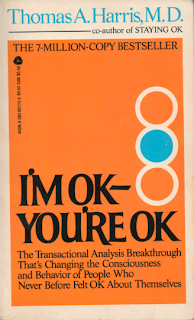 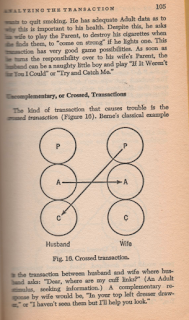 They say (or used to say) that a picture is worth a thousand words. This peculiar post promises to be heavy on pictures to look at and light on words to read.

As 2014 arrived I had thought it would be an excellent idea to write an essay on trends in self help or self improvement. I had also wanted to write a philosophic critique of what I call moralist exhibitionism (which is not the same as narcissism), a long-term trend only increased by the internet and social media. This trend and now way of life is one in which large masses of people flaunt their virtue and personal life-changing stories, their moral political activism, their fights and struggles against The Man, their dietary and nutritional (newfound) discipline, beliefs and practices, their success at having overcome vices and privations against great hardships and obstacles, their battle against Patriarchy and, if they are a right-winger of some stripe, what the secrets are to becoming that prosperous CEO or entrepreneur or how to take down that pesky activist government that conspires to take your prosperity away. But that longish piece will wait for another day. All of these exhortations and pronouncements are commonplace these days and are simply  so many effects of a culture of teams and group identities, rather than individuals, and "oversharing", rather than reserve,  in short a culture that values "intimacy" (I leave aside the question of whether it is in fact a genuine intimacy or not), at the expense of older values like distance and privacy.

Partly as a side effect of being a lay 1970s scholar, I have amassed quite a collection of ephemera and literature documenting the emergence of various popular psychologies, religious sects and self-help movements. In this all too brief and rushed post I will display but a few of these. Hopefully more will follow at a later date. 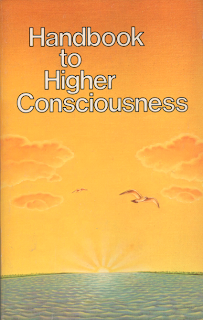 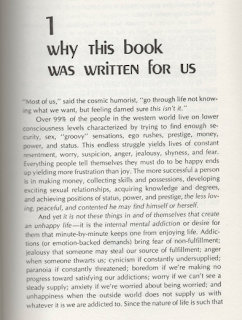 As you can see a lot of the presumptions and beliefs contained within these have now become mainstreamed and common sense (or nonsense),  ideas about individual agency and power, for example, or how even the universe itself works.  The first example is a classic and foundational text of the genre, Harris' I'm O.K.-You're O.K. Note the heavy, sometimes turgid jargon. One of the curious things about the language is its mixture of vernacular slang and scientific sounding technical jargon. They even use graphs. Graphs give the aura of being more realistic and authoritative, making you feel as if you were back in school, albeit probably a private, alternative school.

The Handbook To higher Consciousness appears to be associated with a particular religious/spiritual sect, having been published in 1975 by The Living Love Center. I have not yet done research on this particular group but I surely will and get back to you dear reader.

Even Born-Again Christians got in on the act, borrowing the tone and style of secular self-help as in this curious example: 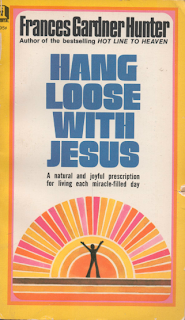 Presumably it was now not enough to love or Praise Jesus, one must now "hang loose" with Him. Had this book been written a few years later it might have even spoken of "getting down with Jesus". This was published in 1973 and, though a thin volume, the author rambles on about how so many Christians are too uptight, serious and "heavy" about their faith and should simply relax and let Jesus do His thing, in short, to hang loose. In other words, with the emphasis on easing up and letting go, this is very much a Christianity for the 70s. The tone and even the content at times resembles a Women's Liberation tract, not in the sense of moral critique of existing or traditional society but in the intimate, candid and relational nature of the approach. The subject of women's self help or inspirational writing merits volumes of study and appraisal.

Hunter writes: "As a new Christian, I was so afraid that everybody would think I was religious that even thought the thirst had begun in my life for the living water, I still didn't want people to know about my avid reading of The Bible. So each Saturday morning I carefully covered my Bible with Playboy magazine because i wanted everyone to think I was a real 'swinger'." 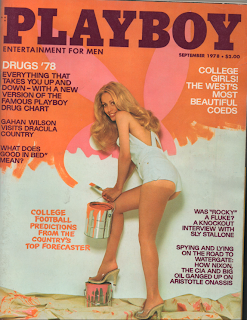 At the opposite extreme from this nice and friendly, almost innocuously banal Christian example is one of my more dated and outrageous finds: an example of a pro-drug, indeed pro-Cocaine book! The illustrations alone are worth the price of the $1.50 I spent on this. I hasten to add that one theme in this book is how the authorities are all wrong about drugs, how safe cocaine is when used responsibly. Literature like this is truly captive to its time. 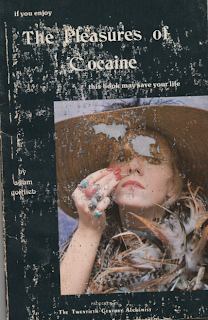 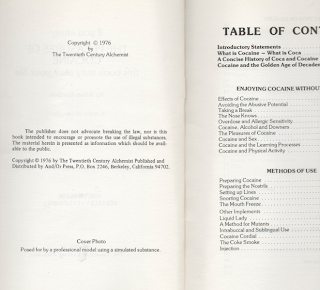 This page tells you how to snort cocaine, complete with an illustration. 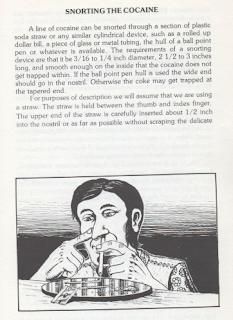 I can't imagine anything being produced or published like this today. Doubtless much of what we currently regard as truthful, or appropriate, or timeless is as much captive to current transient fashion. I wonder what current mores will be found as dubious by future generations. One thing I'll bet though is that, whatever is in today that dies out, it won't appear as embarrassing or even shameful, as extreme as The Pleasures Of Cocaine.

There were satirists and critics of all of this while it was going on. My personal favorite is the masterful novel of Marin County called Serial, by Cyra McFadden. I feature here the back cover of my first edition if only because it mixes together all of the buzzwords, catch-phrases, jargon, neologisms  period. Some of this has lasted to now, some of it is undeniably dated, all of it evidence of the American, or perhaps human quest for inner development tied to group identities of various kinds. 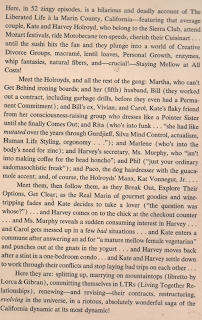 I love the phrase "Martha who cannot Get Behind ironing boards". Note the capitalization here and throughout. One of the brilliant stylistic and rhetorical strategies of McFadden is to have an omniscient voice speak in the insular language of this world, written totally straight and without any explanation as in this sample. Indeed, this book was originally serialized in the Pacific Sun. 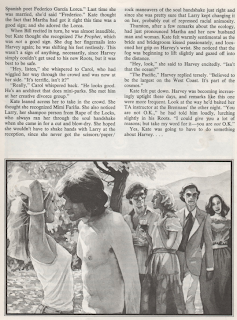 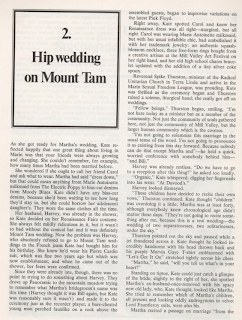 This book was made into an interesting but now forgotten film starring Martin Mull and Tuesday Weld. It has always irritated me that Armistead Maupin's Tales Of The City got such love and acclaim rather than The Serial. Part of the reason could be Maupin's commercial instinct to flatter the reader. McFadden flatters nobody. In my view it is as great  a work of social satire as other more well known works: on a par with the current George Saunders or even the late Stanley Elkin.
And here is one comic author's answer to the "I'm o.k., you're o.k" mantra. 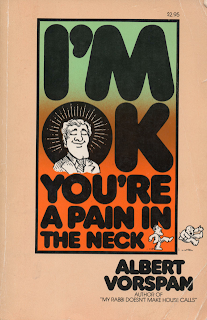 I don't want to go into a long analysis of all of this. I don't want to condemn it and I don't want to praise it. None of the things I have excerpted here are trivial detritus from a bygone age. All of it is interesting. It ought to be important to students of American Studies and History to be sure. But it also should be of continuing interest artistically and aesthetically. Part of the reason is that so much of what we now take to be common sense or take for granted has roots in the period represented here. Another reason is that just as much of what I have excerpted here has been rejected. That is, we should reflect on why we have rejected what we have. Were they right and we wrong? Were they wrong and we, if not right, then, more evolved? How can we tell or know? To me all of it is all one great example of an American form of emergent, evolving Romanticism; the breaking free of the old strictures of traditional society, an expansion of the individual, the expression of a Democratic sensibility. Detractors of these things, those of an older bent, will call it individualism or narcissism, but they are perhaps revealing more about themselves than about the objects of their diagnosis. That is, they do not want the hazards of  this Democratic Romanticism. They fear the bad taste, the outlier Cult, the chaos that may result. I have some sympathy for their fears, but I would never want to live in a society that doesn't at least partly allow such a wild flowering of what philosopher Thomas Nagel calls the "inner tropical luxuriance" of human beings. Interestingly, we now have the technological means for such creative output but the net result is less interesting, more conformist people. It is as if the flattening and abundance of all those voices renders all of it so much white noise and none of it very conspicuous.

To me, any kind of dogma is problematic, no matter how virtuous the intention. A lot of the stuff here has a cult-like feeling about it. Some of it does sound like common sense. Some of it is sentimental in the worst sense. But all of it was actually produced and made and eventually consumed. That fact alone should be a marvel to us. One thing is sure: the human comedy is never boring and, hopefully, will continue, so long as we have some modicum of a so-called civilization. 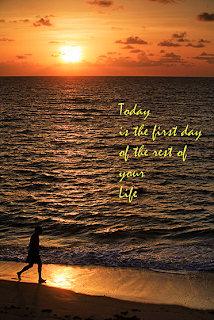 Posted by dandiacal at 4:33 PM