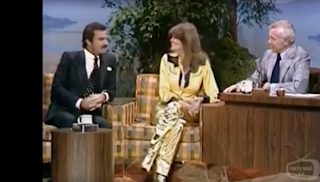 "Everyone has a theory of human nature. Everyone has to anticipate the behavior of others, and that means we all need theories about what makes people tick." Steven Pinker 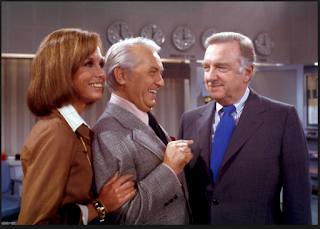 At this period of time in the 20th century there were a very small number of public figures who represented some kind of center of social life. They were in essence metaphors for the average person. If you think of the centrality of television it appears that two men performed this function: Walter Cronkite and Johnny Carson. These figures represented drama and comedy, respectively. People would look up to Walter Cronkite to tell them about the death toll in Vietnam or the scandals of Watergate which of course are subjects most dramatic and serious in nature. Then they would look to Johnny Carson for comic relief, who would make jokes or skits about alleged shortages of toilet paper, actual shortages of gas, or the weather. If you think about it, or just look at the data, practically all of America watched these two men. I would say that on a purely cultural, or as I would prefer to put it, aesthetic level, Walter Cronkite and Johnny Carson kind of lead things at that time. 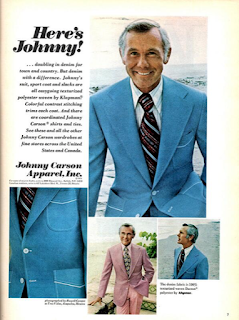 Because of this, both Johnny Carson and Walter Cronkite could be considered geniuses of a sort when it came to performing or presenting in front of an audience. One, Cronkite, was a genius at delivering the news in such a way as to communicate with the widest array of cultures, political ideologies, ages. economic strata and so on. The other, Johnny Carson, was a genius at bringing laughter and entertainment more generally to the same breadth of diversity in his audiences. There were not very many other figures or shows commanding such national attention.  More to the point, it took a very special kind of human being to perform such functions over so many decades and with such consistency - which is why when I use the word genius I am being quite literal. 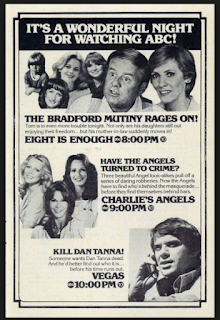 In addition to central human figures there were shows: there were fall lineups for the television viewer and these lineups consisted of only enough shows needed to fill a five or six hour time frame, thus making the amount and duration of shows necessarily small. If you were an ABC person you would have had to watch Eight Is Enough and Three's Company and Charlies Angels, because these were the only shows fitted into the scheduled time slots.

Indeed, so centralized was the culture that even the characters on the t.v. shows would always refer to that one hugely popular cultural object outside of the fictionalized world of the show and mention the object by name.  It was as if one company owned all the same objects. This was a kind of artistic product placement. Thus, on Eight Is Enough the members of the family made sure to mention that they were going to see A Chorus Line because that was the one big musical theatrical show of the period. It was as if everyone who did not live near New York, when they made their one trip to New York in their lifetime, chose A Chorus Line as the show to watch.

When Tommy Bradford, the aspiring musician in the family, mentions the rock that he loves he has to mention Peter Frampton, because millions of people listened to Peter Frampton. They even make sure that Tommy Bradford  has a hairdo similar to Frampton's. Every little boy in America had a bowl haircut just like Adam Rich did on the same show. I had my hair styled the exact same way as did millions of boys. Such things like hairdos you wear and what bands you listen to are examples of a kind of artificially created consensus. Another word I like for them is Fashion, which is anything but superficial. 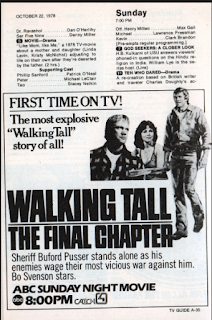 Now if you weren't an ABC person you had the choice of really only two other networks: NBC or CBS. Yes there was also PBS but that was a rarefied and special kind of programming and there was only one PBS.  The choice of dozens of channels, hundreds of channels was out of the question at this time. Now each of these networks had a certain "house style." To name one example, in contrast to ABC, which was the most mainstream and commercial in house style, NBC was seen as having a more "liberal" house style, which is why Saturday Night Live would debut on that network. 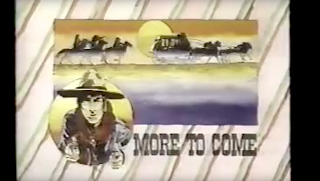 There were no individualized computers where you could create your own playlists made of all the  hundreds of thousands of things created by humans in the entire 20th century. There were radicals or nonconformists who refused to watch television, usually for political or religious reasons. But these were a.) small in number in comparison to the rest of the population and, b). tended to create their own centralized cultures involving favorite entertainment, like the Whole Earth Review or some homegrown Jesus magazine. Therefore, these countercultures had a center and a consensus.

Now it is important to understand that all of this was a consensus. The consensus contained various artificial constructions, erected to sort of hold society together so that it would not collapse into violence and privation. This centralized mode of keeping the peace was part of their function. It was a form of social cohesion - thus my analogy of America tuning into Johnny Carson at 11:30 in their bedrooms. If you are doing that you are quite limited in the amount of other activities you can do at the same time. This is what I mean by "consensus." 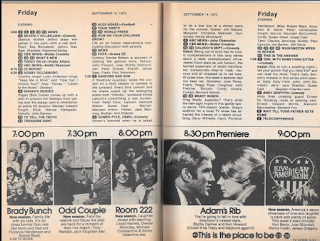 But it is also most important to realize that alongside the consensus there was the reality of how individuals really "felt in there hearts", and heartfelt feelings are always individual and anti-systematic. They may be dormant but they are still present. These innermost feelings were not captured precisely by the consensus culture. The consensus was a kind of crude approximation, sometimes false, sometimes true, but always missing the mark. Society went on like this for much of the 20th century which, if you think about it, is a really long time for one mode to reign.

One of the functions of high art or culture, as opposed to that which I am discussing here, is the creation and distillation of such innermost feeling into forms that best express them: like poems, novels, movies, painting and the like. These have their own traditions and practices but they are quite distinct to the historical, commercial consensus with which I am concerned in this post. One example of a countercultural art is of course the avant-garde. Yet an avant-garde too has its own internal consensus, one example being that there are notable names which tend to be few in number, like a Susan Sontag or Merce Cunningham. When we talk of the higher arts we are talking of a kind of subversion of consensus. Their inherent value is precisely  not in "consensus" but in individuality. Even if their starting point is a genre which is rooted in a consensus they always refuse to stay there.

What I am saying is that the consensus was never ultimately real. There was the successful appearance of a consensus. In this sense the consensus could be thought of as an artwork, as any artwork is a creation of representation and not reality proper. This had the effect of hiding from ourselves our very real differences from one another.

What really happened when the Analog Age was destroyed and replaced by the current Digital Age in which we are ensconced was that we learned for the first time that there is never any such thing as a consensus.  People are simply too damned different from one another for there to be one. They are so different in fact that attempts to form group identities around shared features break down invariably because the differences are always greater than the similarities, whether inside a group or between groups.  The genius of liberal society is that it refuses to force the issue and instead manages or contains conflict. It creates space for people to pursue quite diverse projects without telling everybody what project to pursue. Anti-liberal societies, like the one in which we now in fact live, want to come up with a project and proceed to push it through wily-nily and believe in consensus in a religious and zealous way. All lack of consensus, when discovered, is seen as a kind of error or mistake, an immature development on the way to an eventual and hopeful consensus in the future.

If you decide to destroy the construction of an artificial consensus, which is what the handlers and inventors of the computer basically did, what you will be left with are constant teams of warring parties, or a motley collection of individuals who can never agree on any first principles. The realization of an interconnected world is the attempt to pursue consensus directly which as I said is impossible. The only result can be a maximum lack of consensus because humans were never meant to be inside each others' heads all of the time.

A society where we are all in each others' heads all of the time might inevitably lead to one in which we are at each others' throats too much of the time.  Such is the realization of total transparency and interconnection. I do not say we are fated to stay or perish here. I do say that any discussion of what is to be done must start with this awareness of our Digital Age as an age and a system quite unlike others hitherto experienced and known. It is not all bad but it is also in no way inherently good or progressive.
https://www.youtube.com/watch?v=G5tdqojA26E
Posted by dandiacal at 9:39 PM