I have been enamored with the thought, writing, and even the oratory of Isaiah Berlin ever since I first discovered his work sometime in the early to middle 1990s, that I never tire of discovering newer things about him or finding new applications of his work to current events and everyday non-academic life.

I want to focus on a particular move he always makes which forms but one part of his general wisdom. What he always does is to start by having what appears to be this comprehensive gaze, looking at wide reaches of vast historical time and its accompanying thought, chiefly among these his analysis of the great Romantic revolution and how it basically upended the entirety of the traditional/ ancient, as well as classical worlds.


But Berlin's move is always to go as deep into what he is describing almost as the greatest lawyer for the defense would, and still further as someone living inside or even born into the world he is describing.

Isaiah Berlin will go deep into whatever it is and then he will reverse course, suddenly pull back and outwards and say something to the effect of "but of course this world or object I am examining is far from perfect, is not entirely correct and needs some kind of countervailing force or dissent".


This move forms the basis of Berlin's worldview, not only his pluralism, but an attitude towards being in the world. It is the attitude of one who wished to be seemingly a skeptic and believer at one and the same time. Some might see it as the mark of an essentially moderate or centrist cast of mind. But this is not exactly right. The word that comes closest is that much debated word liberal. It is very close to the cast of mind of yours truly.

A good example of Berlin's brilliance as orator can be found here:

The example I want to use is in his essay "The Sense Of Reality" which was delivered at Smith College in Northampton, in 1956. He takes a wonderfully long time discussing how  some humans have noted that some things seem inevitable in a natural and/or mechanical sense, while still others take the contrary view that things seem not inevitable but rather unpredictable, as "artificially" willed into existence and predicated on contingency, even randomness.  In short, how both contrary attitudes seem apparent at different times and in different reigning orders:

"Everyone, no doubt, believes that there are factors that are largely or wholly beyond conscious human control. And when we describe this or that scheme as impractical or Utopian we often mean that it cannot be realized in the face of such uncontrollable facts or processes. These are of so many kinds: regions of nature with which we cannot interfere, for example the solar system, or the general realm dealt with by astronomy; there we can alter neither the state of the entities in question nor the laws which they obey."


Berlin goes on at great length in this vein, even discussing the reaction against mechanistic or reductionist views, for example, the influence of Hegel as well as Darwin and Marx. He admits, and not with any diminution of respect, that we have much to learn from such developments. indeed in one passage he is unabashed in his passion for the greatness of certain minds in history:

"It is when one of these nerves is touched, nerves which lie so deep within us that it is in terms of them that we feel as we feel and think as we think, that we are conscious of those electric shocks that indicate that some genuinely profound insight has occurred. It is only when this unique, immediately recognizable, disturbing experience comes that we are in the presence of this peculiar and very rare form of genius, possessed by those who make us conscious of the most pervasive, least observed categories, those which lie closest to us and for that very reason escape description, however much our emotions, our curiosity, our industry, are mobilized to record the whole of what wee know."


How different this is than the current view which would only interrogate with suspicion or dismiss with disparagement "great" minds from the past!

Berlin is describing the unparalleled excitement that comes with a kind of discovery or breakthrough with more customary and traditional ways of knowing, and a development that is inseparable from the "specialness" of certain minds who appear to make the breakthrough. Partisans of rationality and the Enlightenment are right to conclude from passages like these that Berlin is never entirely in "their" camp, however much he respected their tradition. Why Isaiah Berlin matters is that he refused, for the most part, to be solidly in any discernible camp, neither fully rationalist, nor fully romantic.

But then he goes on:

"For Marxists and, indeed, all those that social or individual life is wholly determined by laws at least in principle discoverable, men are weaker than they supposed in their pre-scientific pride; they are calculable and in principle capable of omniscience. but as we ordinarily think of ourselves, especially as historians or men of action - that is, when we are dealing with particular individuals and things and facts - we see a very different spectacle of men governed by few natural laws; falling into error, defeated, victims of one another, through ignorance not of laws, but largely of the results of human acts, those being most successful who possess (apart from such, which is perhaps indispensable) a combination of will-power and a capacity for non-scientific, non-generalizing assessments of specific situations ad hoc; which leads to a picture of men as free, sometimes strong, and largely ignorant that is the precise contrary of the scientific view of them as weak, determined and potentially omniscient."


I love how he pairs omniscience and weakness here, contrary to usual habits which would have us think that the position of omniscience would usher in only maximum strength. But above all, as always, he says science alone is never enough. We live today in a world dominated by two views, one you could call religious (and/or spiritual) and the other scientific. Though the scientific and the spiritual are thought to be opposites (with the important exception of those who hold that both science and religion tell essentially the same story, or work and evolve in tandem) they both have a consensus and similarity that is less positive: in both there exists a rule bound sense of determination. A law is a law whiter given by a supernatural force or scientific proof or discovery and these appear to pronounce upon what is to be done.

The scientific view is the dominant one in our current epoch, for it claims to the fullest knowledge possible at any given time - which is considered to be something like a final argument. Indeed, science is so dominant that it is practically a requirement when any subject is broached in major media outlets, it seems de rigueur  to always say "what the science has to say" on the given subject - whether we are discussing eating and nutrition, music appreciation and performance, or ethics and morality, and. of course, sexual behaviors. I am reminded of a recent podcast on dreams which was all about what science tells us dreams in fact actually are rather than what people have simply always thought about them since the latter might appear self evidently inadequate. This is a very different way of discussing dreams than as a source of both mystery and revelation, or as a mere entertainment to pass the time.

Another important thing to note about Isaiah Berlin is his influence on prominent and helpful minds who are currently active. Berlin's work never becomes dated and is applicable to real life situations rather than mere academic speculation or specialization. To name only two: Timothy Snyder, the political historian and commentator and contemporary philosopher  Kwame Anthony Appiah are both deeply influenced by Isaiah Berlin.

I think Berlin points to something that is neither science nor spirit exactly. It doesn't not contradict nor challenge these but does not wave the flag for them either. This "something else" of Berlin refuses systemization; it might refuse even definition, and Isaiah Berlin held it to be real. In much the same way that he though freedom itself was a real fact of human existence, and thus of reality. Yet the only way Berlin was able to conclude as he did was to pass through a great many views that had come before him and enter into such views with the greatest sympathy, even if the views in question were initially alien to him or at least not far from intuitive or self evident. To me, such a process or style of thought is itself one kind of wisdom. 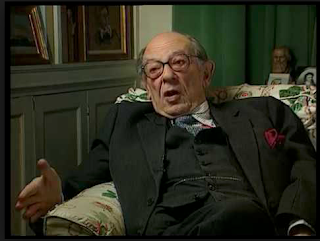