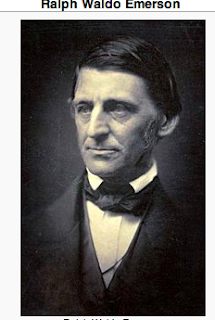 On July 15,1838 Ralph Waldo Emerson delivered what was to be one of his great orations; it is part essay, part jeremiad, a confession, an exhortation, and a marvelous work of theology all rolled into one.
Since this blog is supposed to be contrarian and since Christmas is fast upon us let us revisit a particular passage in the work:

In this point of view we become very sensible of the first defect of historical Christianity. Historical Christianity has fallen into the error that corrupts all attempts to communicate religion. As it appears to us, and as it has appeared for ages, it is not the doctrine of the soul, but an exaggeration of the personal, the positive, the ritual. It has dwelt, it dwells, with noxious exaggeration about the person of Jesus. The soul knows no persons. It invites every man to expand to the full circle of the universe, and will have no preferences but those of spontaneous love. But by this eastern monarchy of a Christianity, which indolence and fear have built, the friend of man is made the injurer of man. The manner in which his name is surrounded with expressions, which were once sallies of admiration and love, but are now petrified into official titles, kills all generous sympathy and liking.

Those words caused Emerson to be essentially banned from speaking at Harvard for thirty years. Emerson was also invited to speak at the bequest of the senior class rather than faculty.
A few words before this passage Emerson does praise the person of Jesus, but note the nature of this praise:

Jesus Christ belonged to the true race of prophets. He saw with open eye the mystery of the soul. Drawn by its severe harmony, ravished with its beauty, he lived in it, and had his being there. Alone in all history, he estimated the greatness of man. One man was true to what is in you and me. He saw that God incarnates himself in man, and evermore goes forth anew to take possession of his world. He said, in this jubilee of sublime emotion, `I am divine. Through me, God acts; through me, speaks. Would you see God, see me; or, see thee, when thou also thinkest as I now think.'

If only many of our contemporary Christians discussed Christ in this way instead of as a ruler who asks that you confirm or deny him as a kind of test, only to condemn you for all eternity if you deny him.
The address begins with one of the most beautiful passages in all of Emerson. As is typical of Emerson he begins the address with reflections on natural processes, since for Emerson process is all:

In this refulgent summer, it has been a luxury to draw the breath of life. The grass grows, the buds burst, the meadow is spotted with fire and gold in the tint of flowers. The air is full of birds, and sweet with the breath of the pine, the balm-of-Gilead, and the new hay. Night brings no gloom to the heart with its welcome shade. Through the transparent darkness the stars pour their almost spiritual rays. Man under them seems a young child, and his huge globe a toy. The cool night bathes the world as with a river, and prepares his eyes again for the crimson dawn. The mystery of nature was never displayed more happily. The corn and the wine have been freely dealt to all creatures, and the never-broken silence with which the old bounty goes forward, has not yielded yet one word of explanation. One is constrained to respect the perfection of this world, in which our senses converse.

But no amount of pastoral and bucolic rhetoric could have prepared the listeners for what was to come.
When it comes to the person, symbol, myth, or holiness of Jesus Christ, it appears that today little has changed. One one extreme there are those, and they are legion, who feel Jesus Christ to be a a man and a god who in his omnipotence has the deepest held opinions on the sexual, dietary and other practices of the three hundred and eighty plus million souls who inhabit these United States. On the other extreme are the debunkers who are convinced Jesus never existed in the first place. In between lies a motley of degrees and variations, not many of them much better, in my view, than the extremists.
Actually, let us say the most offensive (in certain quarters) and most unthinkable thing: let us say that "Christ-Mythers" (to use an unfairly uncharitable term) are correct. That changes very little because in fact it matters little whether Christ was real in the sense that I am real typing this into the blogosphere and you are real as you read what I type. At its best, which isn't often, Christianity and Christmas are not propositional affairs. Rather they are eternal mysteries of human imagination and they exist in order that we may entertain what it would mean, for example, for a stranger to come to town in such a way and with such force that all is forever changed. Much power of certain Western (in more than one sense) art comes from this act. Equally some of the worst in human life (that is, after Christianity) comes from this attachment to pining all hopes on a single person or deity. This last problem was the problem Emerson was referring when he discussed, to use far worse yet up to date language, being "hung up" about Jesus.
In a larger cultural sense there is a split between, on the one had, the advocates of science, some of whom really do believe that the scientific method and only the scientific method can tell us with any accuracy about our lives, and on the other hand, those that deny scientific truths and live only for faith. On the science side, in the most extreme form one finds the proposition that we are nothing but our neurochemistry. On the other side are those who deny scientific values altogether, and read their sacred texts as if they were how-to manuals or maps of the planet earth.
We would all do well to read Emerson's address, conceived of and performed in the Summer, in this Winter season. I have only excerpted from it here. But all of it is a jewel whose brilliance hasn't dimmed a bit in the 172 years that have transpired since. Indeed, it has only brightened and deepened, and reading it makes the so-called seers and gurus of today's world seem themselves most dim.
And that is all I have to say this Christmas. On the subject of Jesus Christ, besides Emerson, I like what Kris Kristofferson has to say best:
Posted by dandiacal at 7:39 PM